Steve Nash reflected on another loss for the Brooklyn Nets in Cleveland. 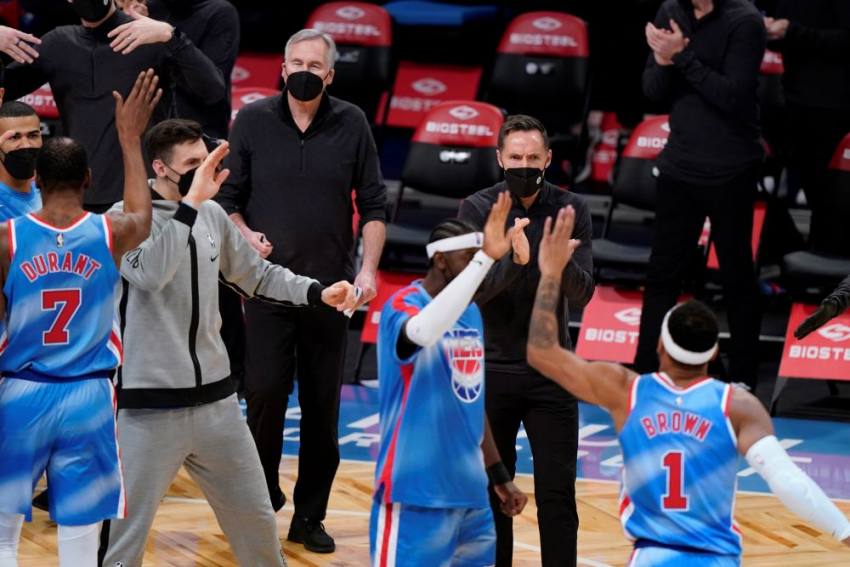 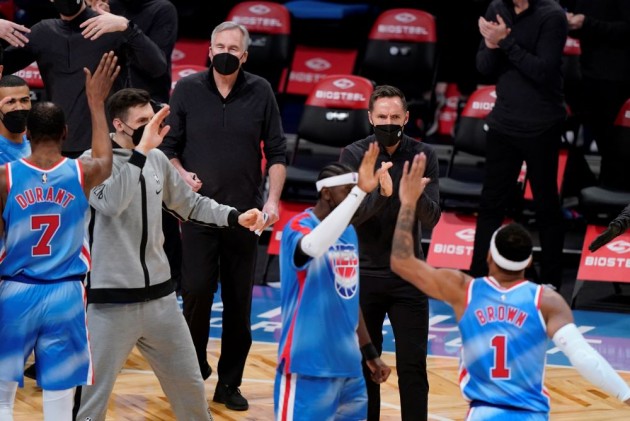 Brooklyn Nets head coach Steve Nash was reluctant to overreact after another humbling loss to the Cleveland Cavaliers, but he insisted his star-studded line-up must improve as Kyrie Irving embraces the challenge. (More Sports News)

Despite boasting Irving, James Harden and Kevin Durant, the Nets were swept by the Cavaliers in Cleveland following Friday's 125-113 defeat.

After losing 147-135 to the Cavaliers in double overtime on Wednesday, the Nets were again beaten by Cleveland, this time in the absence of Durant (Achilles rehab).

Despite boasting All-Stars and former MVPs in Irving, Harden and Durant, Brooklyn's defensive fragilities were exposed after being outrebounded 50-29 on Friday, while the Nets allowed 134 points in the paint across the two games.

look close for the pic.twitter.com/bWg8ipOyTd

"I don't want to overreact — but it is something we have to continue to chip away at," first-year coach Nash said afterwards. "We have to build that resolve, that hunger that desire to win some hustle battles, to win the turnover margin, to win the rebounding margin. Win in other ways.

"We've got a lot of things to work on. There's a lot to clean up. It's very early. It's relatively knew having Ky back after two weeks. James joining the team. Kevin sitting out tonight. It’s a lot thrown at us. So, you know, I don't want to overreact, but we are going to urge the guys to clean up as much as we can the hustle areas. But also, schematically, just continue to refine and get better and you know how this league is.

"A few days ago, we were on a four-game winning streak and now we under performed in two games. So, we've got to find a way to get ourselves playing a little cleaner, a little sharper, trying to clean up some of these categories that we're not competing well enough in."

Irving led the Nets with a game-high 38 points on the road, while Harden put up 19 points and 11 assists – his fourth double-double in as many appearances since joining in a blockbuster trade from the Houston Rockets as Brooklyn fell to 9-8 in the Eastern Conference.

Nash added: "You see you see the records. We've done well against better teams. But we've talked to them about having a target on our backs and that you're gonna get people's best shots. They'll be excited to play the guys that we have on our roster. So there's a certain element of that.

"We have to make them aware of that discrepancy in the effort against the team we're playing, but also just overall that we stick to what we will what our path is. And it's not a normal season, so it's not going to be two days between games sometimes where you can practice. It's going to be very rare. We're gonna have to really keep chipping away. It's gonna be small margins and small growth, but continually have that be our plan and not get sideways over a couple of losses.

"So we got to demand, we got to expect, we got to push and at the same time we got to understand that it's not going to be straightforward this season because of the parameters that were facing."

The Nets have dropped consecutive games since Irving returned from a seven-game absence due to personal reasons, and he said: "Whatever we have to do moving forward, like I said this was two humbling losses.

"… now we lost tonight's game, back-to-back. Now what are we gonna do? Nothing more but to pick ourselves up out there as competitors, go home, talk about it. And now we play in less than 24 hours. So I'm looking forward to the challenge with my team-mates."