With this win, New Zealand have gained an unassailable 2-0 lead in the ongoing three-match T20I series against Sri Lanka at the Pallekele. 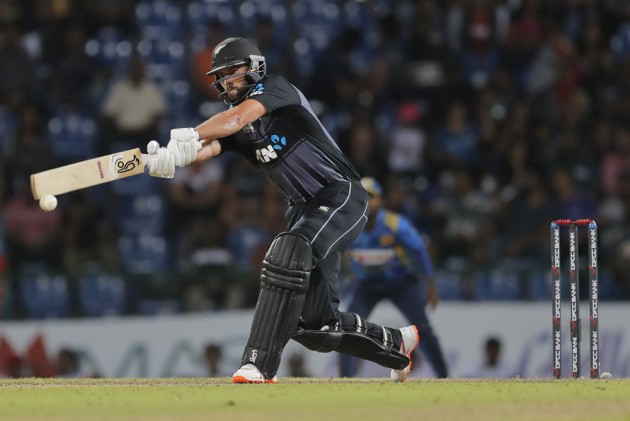 Colin de Grandhomme and Tom Bruce played knocks of 59 and 53 respectively to give New Zealand a win by four wickets against Sri Lanka in the second T20I of the three-match series at Pallekele.

With this win, the Kiwis have gained an unassailable 2-0 lead in the series.

Chasing 162, New Zealand got off to a bad start as Akila Dananjaya dismissed opener Colin Munro (13) in the second over of the innings.

Soon after, Dananjaya sent both Tim Seifert (15) and Scott Kuggeleijn (8) back to the pavilion to reduce Kiwis to 38/3 in the fourth over. The spinner had both batsmen caught plum in front and as a result, the duo was adjudged leg-before wicket.

Colin de Grandhomme and Tom Bruce got together in the middle and they steadied the innings for the Kiwi team. They did not allow the asking run-rate to get beyond the side.

The duo stitched together a partnership of 109 runs, but with 15 runs required from 11 balls, de Grandhomme (59) perished, giving Sri Lanka hope of victory.

With 7 runs needed from the final over, the Kiwi were given a big blow as both Bruce (53) and Daryl Mitchell (1) were sent back to the pavilion in successive balls. On the third ball of the over, there was a collision at the wide long-on boundary, one fielder took the catch, but he crossed over the boundary, and a six was awarded to New Zealand.

In the end, New Zealand won the match by four wickets and with two balls to spare.

Earlier, cameos by Niroshan Dickwella and Avishka Fernando helped Sri Lanka post a score of 161 runs for the loss of nine wickets in the allotted twenty overs.

Openers Kusal Perera and Kusal Mendis provided a steady start to Sri Lanka's innings as the duo put up a stand of 34 runs, but their resistance quickly came to an end as both batsmen were sent back to the pavilion to reduce the side to 40/2 in 6.2 overs.

Mendis (26) was dismissed by Seth Rance whereas Perera (11) was sent back to the pavilion by Ish Sodhi.

Fernando and Dickwella retrieved the innings for the Islands as the duo mixed caution with aggression to keep the scoreboard ticking along. Both batsmen put up a stand of 68 runs, but their stint at the crease finally came to an end as Fernando (37) was dismissed by Kiwi skipper Tim Southee.

After Fernando's dismissal, Kiwis got two back-to-back wickets of Dickwella (39) and Dasun Shanaka (0) to leave Sri Lanka 124/5 in 16 overs.

Shehan Jayasuriya and Wanindu Hasaranga stitched a brief partnership of 24 runs, but in trying to accelerate in the death overs, both batsmen perished and the side was reduced to 150/7 in the 19th over.

Isuru Udana managed to score 10 runs off the final over and as a result, Sri Lanka went past the 160-run mark in the allotted twenty overs.

Sri Lanka and New Zealand will next lock horns in the final T20I of the three-match series on September 6.