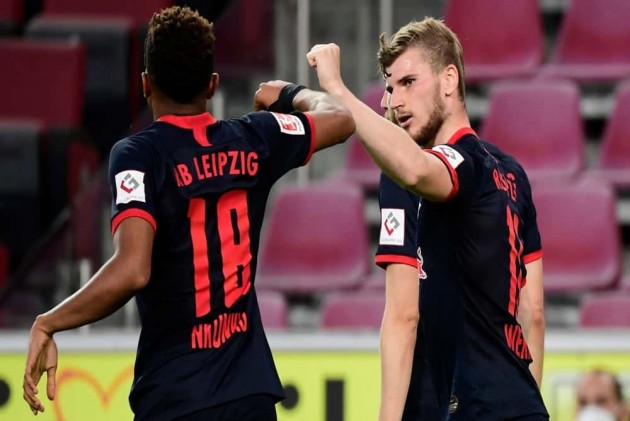 RB Leipzig climbed to third in the Bundesliga table with a 4-2 victory away to Cologne on Monday.

Four goals from four different goalscorers secured a return to winning ways for Julian Nagelsmann's side, who were held by Hertha Berlin last Wednesday.

Anthony Modeste blasted in a lifeline only for Dani Olmo to score Leipzig's fourth two minutes later to make certain of the win.

Cologne were on a four-game winless run heading into the match after weeks of improvement under Markus Gisdol, but they were ahead just seven minutes in when Cordoba's shot was too much for Peter Gulacsi after he had nudged Elvis Rexhbecaj's effort onto the post.

Cordoba saw a header held by Gulacsi as Cologne's bright start continued, but they were pegged back through frustratingly simple fashion, Angelino's cross from the left headed powerfully home by Schick.

After Cordoba went off injured, Leipzig grabbed a second before the break, Konrad Laimer sending Nkunku through on goal to chip a clever finish over Timo Horn.

The game looked to have been effectively wrapped up five minutes after the restart. Gulacsi caught a free-kick from Florian Kainz and sent a long ball forward to Werner, who ran unchallenged into the box and slotted beyond Horn.

1 - With his assist for Timo Werner's goal Peter #Gulasci becomes the first keeper to be involved in a goal in the current Bundesliga season. Quarterback. @RBLeipzig_EN#KOERBL pic.twitter.com/iBTgxMGoI7

Cologne needed just four minutes to halve the deficit as Modeste turned into space and rifled a shot beyond Gulacsi from 25 yards out to drag them back into the contest, but Olmo restored the two-goal lead only two minutes later, side-footing through a crowded box and past Horn after the home side failed to clear a corner.

Modeste thought he had won a penalty following a challenge from Lukas Klostermann, but referee Christian Dingert correctly overturned the decision after checking the VAR monitor, and the striker's outing ended in further frustration when he dragged a shot wide after running clean through on goal in the closing moments.

What does it mean? Leipzig take back control in top-four race

With Bayern Munich nine points above them, Leipzig's title challenge looks forlorn with only five games to go, but this could be a result that goes a long way to securing a top-four finish.

They are two points above Borussia Monchengladbach and Bayer Leverkusen in fourth and fifth, respectively, keeping a Champions League return in their own hands.

All of Leipzig's front four got on the scoresheet, their movement causing real difficulties for the Cologne back four despite a somewhat uneven display from Nagelsmann's side.

Europe's elite are said to be circling Dayot Upamecano, but this was a display to catch the eye for the wrong reasons. He lost Rexhbecaj in the lead-up to the first goal, gave Cordoba a good chance with a header and failed to stop Modeste's turn and strike.

Leipzig host Paderborn on Saturday, while Cologne head to Augsburg a day later.