Rupa Gurunath is the president of the Tamil Nadu Cricket Association. She is also a director in India Cements Limited, the parent company that owns Chennai Super Kings 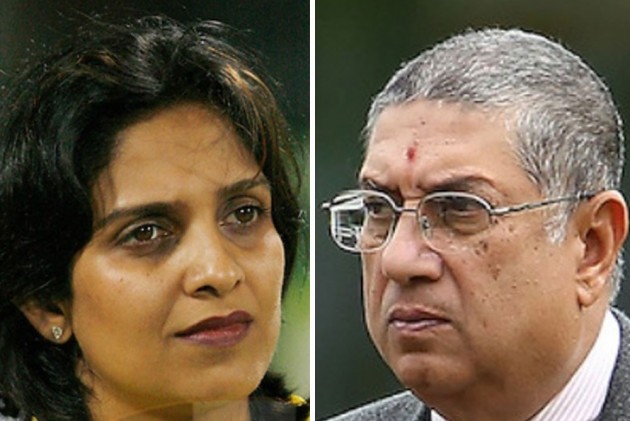 At a time when the Board of Control for Cricket in India is besieged by questions on "ethics," the president of the Tamil Nadu Cricket Association, Rupa Gurunath, has been served with a notice on "conflict of interest." (More Cricket News)

Rupa Gurunath, is the daughter of former BCCI and TNCA strongman N. Srinivasan.

Rupa was elected TNCA president in September, 2019 to become the first woman cricket chief of a state association. She is also a director in India Cements Limited, the parent company that owns IPL team Chennai Super Kings.

Rupa Gurunath has been served with a notice by BCCI ethics officer Justice DK Jain, a former Supreme Court judge.

The BCCI notice, dated December 8, 2020 states: "TAKE NOTICE that a complaint has been received by the Ethics Officer of the Board of Control for Cricket in India (for short "the BCCI") under Article 39 of the Rules and Regulations of the BCCI, regarding certain acts, allegedly constituting as "conflict of interest" on your part.

"You may file your written response on or before 24th December 2020, with the Office of the Ethics Officer, BCCI, Mumbai, for further proceedings in the matter.

"TAKE FURTHER NOTICE that on your failure to respond to the present notice, the Ethics Officer shall be constrained to proceed in your absence, without giving any further opportunity of filing a response to the Complaint, to you."

Given Srinivasan's clout, Rupa's ascension to the TNCA hotseat was a smooth affair. TNCA has always had hardcore administrators but Rupa, who had no prior experience in cricket administration, was seen as Srinivasan's dummy.  The notice was issued after a complaint from Sanjeev Gupta, a former member of the Madhya Pradesh Cricket Association and a whistleblower.

Srinivasan had fallen from grace after being removed from cricket administrative duties by the Supreme Court in 2014 in the wake of the 2013 IPL match-fixing and betting scandal.

Rupa's husband Gurunath Meiyappan was also banned for his alleged involvement in betting during IPL. Gurunath, like Rupa, was a CSK team owner.

Although the Supreme Court passed the new BCCI constitution in August 2018, TNCA refused to fall in line with the new rules which were recommended by the Justice RM Lodha committee.

The new BCCI constitution makes Srinivasan and his family members ineligible to hold positions in a state association for a number of reasons. Conflict of interest is one of them.

Tamil Nadu, like Haryana, remain adamant not to accept the BCCI constitution. They don't have voting rights and have their BCCI funds suspended. The matter is in Supreme Court.

Interestingly, DK Jain's notice comes at a time when the BCCI itself has challenged the new constitution and want sweeping changes in at least six clauses the Board mandarins find "restrictive" in nature.

READ: What Is So Special About Ganguly, Shah? Asks Top Judge

Conflict of interest has been a major issue in Indian sports and BCCI has several cases where "families" have clung on to power. The Srinivasans are not the only ones.

Ethics too have been compromised by BCCI office bearers, who now want to overturn the constitution after getting elected.

BCCI president Sourav Ganguly, who is riding a petition to prolong his stay as Board president, has faced conflict of interest issues, too. His elder brother Snehasish Ganguly is the secretary of the Cricket Association of Bengal.

In this confusing climate of ethical violations, what action Justice Jain takes on Rupa Gurunath remains to be seen.