Joan Laporta is Barcelona's new president. We have taken a look at what will be his key areas of focus following his election 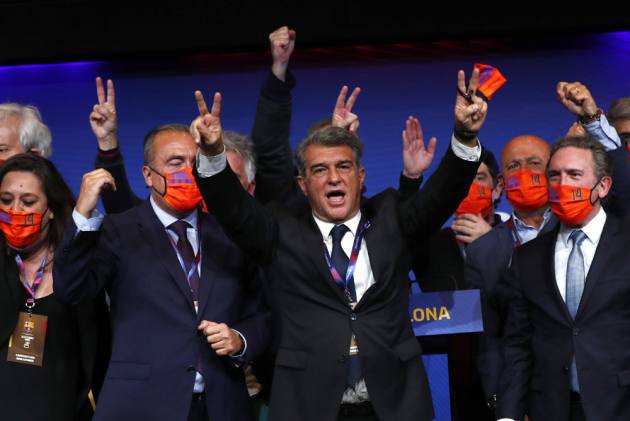 A new era begins in earnest for Barcelona, with Joan Laporta's second spell as president confirmed on Sunday following his victory in the election. (More Football News)

Regarded as arguably the most important political event at the club in a generation, much was said to be riding on the collective decision of the socios, or members, who voted.

Laporta, Toni Freixa and Victor Font had spent months outlining their plans in public, with La Masia, the club's crippling debt and the tumult caused by the previous administration among the main focuses.

But outsiders can be forgiven for thinking the election essentially boiled down to which candidate stood the best chance of convincing Lionel Messi to stay.

Laporta's first spell as president, from 2003 to 2010, coincided with Messi's rise from the youth ranks to global star, while he was also in charge when Pep Guardiola was promoted to the top job 2008.

While nostalgia may have played a strong part in Laporta's ascension, 54 per cent of voters feel he is the best man to navigate a challenging period – but what are the most important tasks facing him?

The final tally of the FC Barcelona presidential election with 100% of the vote counted. pic.twitter.com/dVS33mjpXe

Messi – Should he stay, or should he go?

Laporta stopped short of insisting Messi will definitely stay put under his administration, which was probably wise given he only has a few months left on his contract. Fans would have surely seen through such a promise.

However, what he did throughout his campaign was emphasise his relationship with the six-time Ballon d'Or winner, while also pointing out Messi's lack of familiarity with his rivals.

"I am the only one who can ensure his continuity. If I don't win, I'm sure Leo won't continue at Barca," Laporta said at last week's debate. "He was not very happy with Freixa's time [Laporta's rival was an ally of the discredited Josep Maria Bartomeu], when they let him see that he was expendable."

Of course, Messi attempted to force an exit last year, but his refusal to drag the issue through the courts meant Barca managed to keep hold of their prized asset.

Since then he has insisted his future is tied to the competitiveness of Barca. Laporta's discussions with him will be key, but they could be undermined should Ronald Koeman's men collapse in the latter stages of the season.

Joan Laporta: "The fact that the best player in the world came to vote today, along with his son, is proof that Leo #Messi loves Barça." pic.twitter.com/plnEpSAlfu

For years Barcelona's La Masia academy was the jewel of the club, the inspiration behind many hugely successful teams and the school that developed some of the finest players to play the game.

Even though a significant portion of the current squad have come through the ranks, La Masia's standing isn't quite what it once was and the likes of Messi, Sergio Busquets, Jordi Alba, Gerard Pique are all into their thirties.

But Laporta emphasised the importance of the academy during his campaign, adamant he would look to restore it to its former glory, previously saying: "It will be our pillar, the backbone of the club's values."

Nevertheless, with Ansu Fati emerging as a ready-made star and Ilaix Moriba recently establishing himself as one to watch, La Masia's reputation is already receiving a timely boost.

Eric Abidal's spell as sporting director was ill-fated, to say the least. A day after sacking Quique Setien in August, the Frenchman was unceremoniously dismissed as well, with his overseeing of transfers making him a contentious figure long before he was eventually shown the door.

Among his purchases were the likes of Kevin-Prince Boateng, Malcom, Jeison Murillo, Junior Firpo and Antoine Griezmann – it'd be difficult to consider any of those successes.

Granted, not all of his signings have been poor, with Pedri, Clement Lenglet and Frenkie de Jong brought in under his watch, but over the past few years the club has spent a significant amount of money on sub-standard players or underperforming so-called 'superstars'

As such, the Barca squad is bloated in terms of its wage expenditure and many of the back-up players are expected to be put up for sale, easing the financial strain and boosting revenues.

But before Barca can begin outlining transfer plans and a potentially revised recruitment strategy, Laporta needs to do something else…

Laporta is expected to bring his own people in to manage the club's sporting structure, and Jordi Cruyff – of course, the son of Barca icon Johan – is among the frontrunners for the sporting director post.

Cruyff is still thought to have significant influence and respect inside the club due to his family name, with the former Manchester United player recently affirming to Cadena Ser that he believes his father would have always backed Laporta in an election.

Mateu Alemany, former Valencia general manager, is also widely reported to be on his way in.

Alemany had played a major role Valencia's resurgence during the previous decade but left under something of a cloud in November 2019, with the Frenchman and club owner Peter Lim at odds.

Lim had dismissed popular head coach Marcelino Garcia Toral, of whom Alemany was a staunch backer, and that left the general manager's position looking untenable, particular after local reports claimed he wasn't even consulted about the subsequent appointment of Albert Celades.

Very little has gone right for Valencia since the exits of Marcelino and Alemany – their reputations, however, have remained firmly intact.

Joan Laporta: "Johan Cruyff is an inspiration to us." pic.twitter.com/fma5TKNU4Q

Strengthen the squad while managing debt

It's no secret that Barcelona's financial state is a mess – they have amassed €1.2billion in debt and that has unsurprisingly impacted their clout in the transfer market.

One of Laporta's main messages ahead of the election was that Barca needed a board and president with experience in such a tricky time, and that's certainly something he has in abundance.

In his first interview since being elected, Laporta stressed the need to make the club financially stable. He told Catalunya Radio: "The first thing will be to do an audit but first I will greet the workers. The club is in mismanagement and now we will finally be able to make the necessary decisions. We will do an audit and apply our shock plan so that Barca is economically sustainable."

Drastic changes could be on the cards, yet despite the financial state of the club, they will still need to work on improving the squad.

Juggling the two won't be straightforward, particularly when you add Messi's demand for competitiveness into the mix.