Brazil, Peru, Colombia and Ecuador have qualified for the Copa America 2021 knock-outs from Group B, joining Group A's Argentina, Chile, Paraguay and Uruguay in the quarter-finals 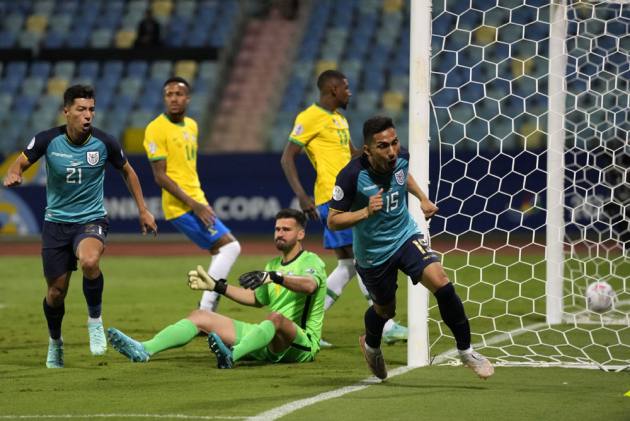 Ecuador avoided defeat against Brazil for the seventh time in their lop-sided rivalry to make the quarter-finals of the Copa America 2021, while Peru beat Venezuela to finish second behind the Selecao in Group B on Sunday. (More Football News)

With both the matches starting at the same time, both Ecuador and Venezuela need results in their favours. Colombia, who sensationally won their maiden title in 2001 at home without conceding a goal, managed to play out a 1-1 draw in Goiania.

Eder Militao struck in the 37th minute to give Brazil a deserved lead, but Angel Mena found the equaliser in the 53rd minute even as Venezuela played a catch-up game against Peru in Brasilia after Andre Carrillo scored for Los Incas in the 48th minute. And it proved more than enough for Ricardo Gareca's men.

This was Peru's 21st win against Venezuela in 36 meetings.

Brazil had already qualified in first place in Group B and Tite took to the liberty to field a much-changed XI against a side that needed at least a draw to save themselves from elimination.

And the draw, fifth against Ecuador in their 34 meetings, meant that they failed to win a game since their 1-0 lose to Argentina in an international friendly in November 2019.

Brazil, Peru, Colombia and Ecuador have qualified for the knock-outs.

The final round of Group A matches will be played on Monday. But Argentina, Chile, Paraguay and Uruguay have already qualified for the quarter-finals, with Bolivia becoming the first team to be eliminated.