Peru and Paraguay were tied 3-3 at the end of regulation time. Peru prevailed 4-3 on penalties and will face Brazil next 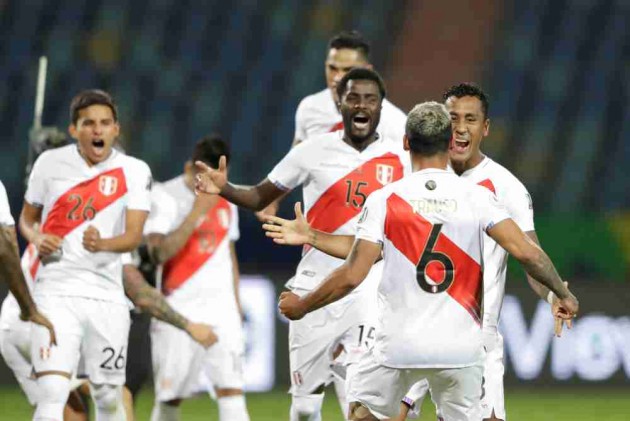 Peru beat Paraguay 4-3 on penalties to advance to the Copa America semifinals in the most thrilling tournament match so far. (More Football News)

Regular time at the Olimpico Stadium in Goiania finished 3-3 after a hard-fought match that included red cards to key players of both teams and two goals by Italian-born Gianluca Lapadula for Peru.

The decisive moment in the quarterfinal came after Peruvian goalkeeper Pedro Gallese stopped Alberto Espinola in the shootout. Miguel Trauco converted his shot to put the runners- up of the 2019 Copa America back in contention.

“This was an amazing match,” a tired Lapadula said after the shootout, in which he converted from the spot.

“We can't choose adversaries, we have to think we are in the semifinal. Now we have to work to get there well.”

Peru will face Brazil next in the semifinals.

Paraguay opened the scoring in the 11th minute with Gustavo Gómez pushing the ball to the empty net after a corner.

Lapadula scored his first in the 21st from close range after an assist from Andre Carrillo. He added another in the 40th minute with a crossed shot from the left flank after Paraguayan defenders stopped to complain about a foul.

Peruvians looked certain they would advance after they took the lead and Paraguayan defender Gómez was sent off in added time after a second yellow.

But Paraguay started the second half well and put pressure on Peru. Junior Alonso levelled the scoring in the 54th minute after burying the ball past Gallese after a corner. And opportunities kept coming, especially in corners.

Peru's Yoshimar Yotun frustrated Paraguayans with a goal from the edge of the box 80th minute after the ball deflected off a Paraguayan defender. But more twists were to come.

Five minutes later, Peruvian striker André Carrillo also received his second yellow. Paraguay decided to charge forward and it resulted in a late close-range goal by substitute Gabriel Avalos — who had stepped in eight minutes before — to level the match and send it to penalties.

Peru advanced to the semifinals after Lapadula, Yotún, Renato Tapia and Trauco scored in the shootout.

Peru will play its Copa America semifinal on Monday at the Nilton Santos Stadium in Rio de Janeiro. It lost 4-0 in the group stage of the tournament to Brazil, one of its possible semifinal opponents. (AP)