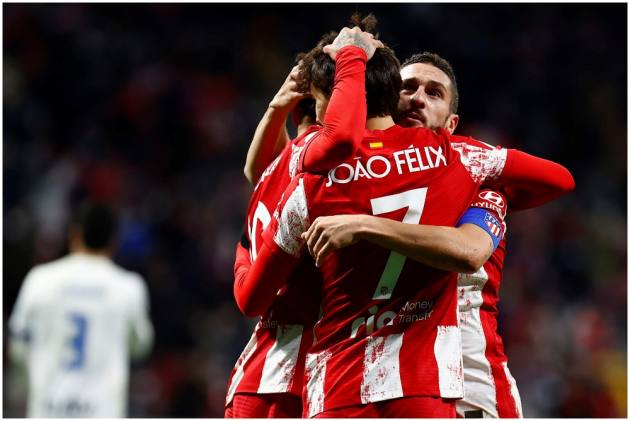 Villarreal and Osasuna became the latest top-flight sides in Spain to be eliminated by lower-division rivals from the Copa del Rey 2021-22, while Atlético Madrid eased into the round of 16. (More Football News)

Griezmann walked off gingerly with a possible leg injury with 15 minutes left, putting in doubt his availability for Sunday's Spanish league match at Villarreal and the Spanish Super Cup to be played in Saudi Arabia next week.

Unai Emery's Villarreal lost 2-1 at Sporting Gijón after the second-division side came from behind. Moi Gómez put Villarreal ahead just after halftime, only for Djuka Durdevic to level before defender Bogdan Milovanov struck the winner for the hosts with two minutes left.

“We congratulate them. They played their game, took advantage of their chances and got the win,” said Emery, whose side entered the match on a six-game winning streak across all competitions. Osasuna was ousted by second-division Girona 1-0 after it failed to recover from an early goal by David Juncà.

Cádiz needed a stoppage-time goal from Tomás Alarcón to eke out a 1-0 win at Fuenlabrada. Sevilla had an easier time at Zaragoza and moved on after Jules Koundé and Rafa Mir scored in each half for a 2-0 victory.

Nico Williams scored his first two goals since becoming a regular starter for Athletic Bilbao this season to secure a 2-0 win at Atlético Mancha. The 19-year-old Nico Williams is the younger brother of Bilbao striker Iñaki Williams. Bilbao reached the last two finals of the Copa del Rey, losing both.