A toothless Atletico Madrid side were dumped out of the Copa del Rey in the second round, with minnows Cornella claiming a 1-0 win. 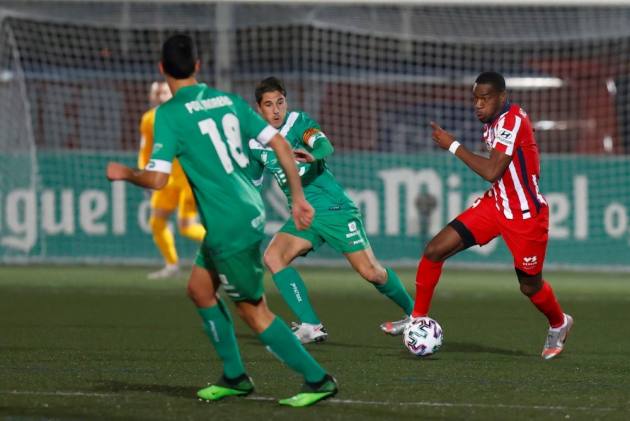 Atletico Madrid were the victims of a Copa del Rey giant-killing for a second successive season as Diego Simeone's side went down 1-0 to Cornella. (More Football News)

LaLiga leaders Atleti lost 2-1 to Cultural Leonesa in the round of 32 last season, and slumped out to Segunda B opposition on Wednesday.

The 10-time Copa winners fell behind to Adrian Jimenez's sensational flick seven minutes into the second-round tie in Catalonia.

All over in Cornellà.

Sanchez was fortunate not to concede a penalty for handball in the opening minutes, before Jose Gimenez, making his 200th Atleti appearance, scythed down Raul Prieto.

With Gimenez, who was booked for his troubles, off the pitch receiving treatment, Cornella added insult to injury, with Agus Medina's cross flicked home expertly by Jimenez.

Atleti seemed set to restore parity shortly after the 20-minute mark, yet Angel Correa saw two efforts blocked either side of Saul hitting the crossbar.

Though Atleti were seeing over 60 per cent possession, they would have been 2-0 down heading into the break if not for Miguel San Roman's save from Pablo Fernandez.

Vitolo got in behind Cornella's backline early in the second half, only for an errant offside flag to deny him a chance to equalise.

Torreira's curling free-kick was inches away from levelling proceedings, though Atleti were then fortunate that Eloy Gila flicked over from close range at the other end.

Sanchez's frustrating night was made worse when he was deemed to have kicked out at Cornella goalkeeper Ramon Juan – the full-back seeing red just 11 minutes after receiving his first booking as Atleti's comeback efforts proved futile.

What does it mean? Full focus on LaLiga for Atleti

Wednesday's reverse halted Atleti's five-game winning run, and was just their second defeat of the season in domestic competitions, against a Cornella team that has lost its last three league games.

Though a strong side, including Joao Felix, served up a hugely disappointing showing and failed to muster a single attempt on target (compared to six from Cornella), Atleti hold a two-point lead at the top of LaLiga, with two games in hand over rivals Real Madrid. Simeone will now be demanding his side bounce back and make that advantage count.

Those not fully aware of Cornella's squad would be forgiven for thinking Jimenez was a forward, rather than a centre-back, given the improvised nature of his excellent finish.

Jimenez made four clearances – joint-second highest for Cornella – and three interceptions, only conceding one foul as he played his part in a superb defensive display and ultimately proved the difference to seal a historic victory.

Not a happy milestone for Gimenez

Gimenez has now made 200 appearances for Atleti in all competitions, becoming the second Uruguayan player to do so, after Diego Godin, though only 10 have come this season.

However, his landmark game lasted just 11 minutes as he succumbed to an apparent ankle injury sustained while conceding the free-kick which led to Jimenez's goal.

- Atleti have been eliminated from Copa del Rey by a third-tier team in consecutive seasons for the first time (2-1 vs Cultural Leonesa in 2020 and 1-0 vs Cornella in 2021).

- Cornella have won a Copa del Rey game against a top-flight team for the first time after losing their previous two matches against them, scoring just one goal and conceding nine (vs Real Madrid in 2014).

- Atleti have failed to register a single shot on target in a game this season in all competitions for the second time (also against Villarreal in October in LaLiga).

- With his red card against Cornella, Ricard Sanchez (20 years and 319 days) has become the youngest player to be sent off for Atleti under Simeone in all competitions.

Atleti will look to return to form when they host Athletic Bilbao at the Wanda Metropolitano on Saturday. Cornella, meanwhile, have an away game against Gimnastic Tarragona on Sunday.