India no.1 Viswanathan Anand, no.2 Vidit Gujrathi, P Harikrishna and B Adhiban and the country's top two women players -- Koneru Humpy and D Harika -- took part in the event organised by chess.com on Sunday 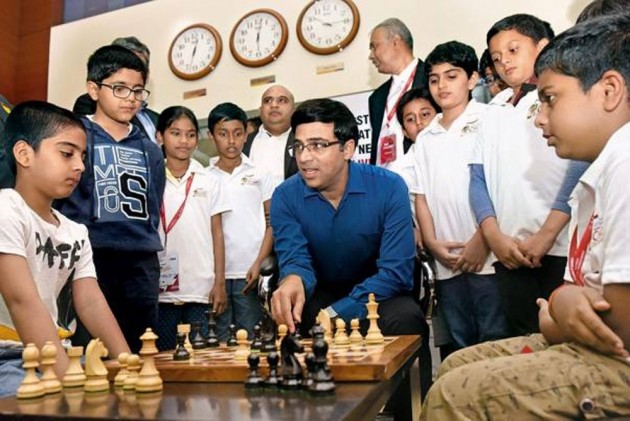 India no.1 Anand, no.2 Vidit Gujrathi, P Harikrishna and B Adhiban and the country's top two women players -- Koneru Humpy and D Harika -- took part in the event organised by chess.com on Sunday.

The 20-board simultaneous event saw an amount of Rs 4.5 lakh (USD 6,000) being raised, Rakesh Kulkarni, an International Master and Director of chess.com-India, told PTI.

Anand, who is stuck in Germany owing to the travel restrictions in place due to the coronavirus pandemic, was the one who suggested such an event.

"Anand was the one who had the idea and suggested it. He was the pioneer. He then got all the top players to join. Chess.com made the logistical arrangements," he added.

Meanwhile, Adhiban who won all his 18 games (two did not turn up), said he was delighted to have taken part in such an initiative and contributed to a cause.

Harika said "It is a privilege that we can play our sport from home and collect funds for a good cause."

"It was a much different experience than playing normal simul as in internet 20 different boards pop up and you have to keep track of it. So, it is difficult than an over the board simul (simultaneous display). But the whole point is to interact with fans and collect donations," she added.

To participate in the event, players were required to have a chess.com blitz or FIDE standard rating of under Elo 2000 and needed to make a donation during the registration process.