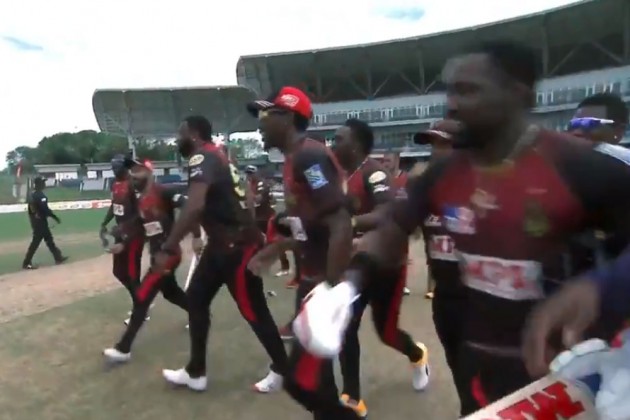 Lendl Simmons (84 off 49) and Darren Bravo 58 (47) stitched an unbeaten 138-run third-wicket stand to take Knight Riders home with some scintillating hitting towards the end of the match.

The duo milked Afghan spinner Zahir Khan for 23 runs in 17th over to end whatever little hope Zouks had.

Earlier, Pollard won the toss and opted to bowl first. Ali Khan struck early to remove Rahkeem Cornwall in the second over, but Mark Deyal and Andre Fletcher put together a 67-run stand for the second wicket.

Zouks skipper Sammy failed to make an impression, scoring run-a-ball eight with the help of a six.

Knight Riders, playing without flambouyant Sunil Narine, started the chase in a nervy fashion, losing Tion Webster and Tim Seifert in successive overs. At 19/2 in 3.3, Bravo joined Simmons and they did the job.

This was their 12th win of the season and have rightfully claimed the invincibles tag.