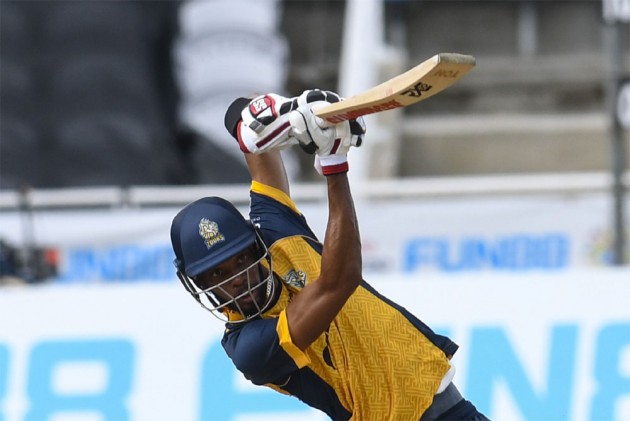 Put in to bat, Colin Munro (50 from 30 balls) started the assault with a fifty while Darren Bravo (54) and Kieron Pollard (41) continued it, sharing an unfinished 98-run stand as Trinbago piled up a massive total of 185 for 3.

In reply, Johnson Charles gave the Barbados Tridents a chance as he scored 52 in 33 balls with three sixes and four fours and made a major contribution to the opening stand of 68 with Shai Hope (36 in 38 balls).

But the rest of the line-up could not continue the charge as wickets fell at regular intervals. Skipper Jason Holder (34) and Ashley Nurse (21) added 45 runs in four overs between the 16th and 20th overs, but it wasn't enough in the end.

Earlier, Munro came in at the fall of Lendl Simmons, who scored run-a-ball 21. Other opener Sunil Narine (8), who had fifties in the first two matches, couldn't do much and left soon after.

Munro was then joined by Bravo (54) as they kept up the scoring tempo. Munro departed at the end of the 13th over with the total at 87 for three.

Then Bravo and Pollard savaged the Tridents bowling for 98 runs in seven overs.

Pollard was particularly severe with his 41 coming in 17 deliveries, which included four sixes and one four and a lot of good running in between the wickets as they aggregated 185 for three in 20 overs.

In reply, Nicholas Pooran kept them in the hunt with a 49-ball 68 but the Warriors needed 13 off the last over with four wickets in hand.

However, debutant Chemar Holder bowled a brilliant last over to restrict the Warriors to 134-8.

He conceded just two runs and took two wickets to snatch a win for the Zouks, who registered their third successive win.

Chase and Nabi re-built the innings as Zouks reached 67 for 4 at halfway. The West Indies batsman brought up his second T20 fifty off 40 balls and provided the acceleration with four overs to go.

In the last over, Glen and Chase fell in consecutive balls and the late flourish did not happen.

Defending 144, Scott Kuggeleijn had Brandon King caught behind for one and Shimron Hetmyer top-edged to square leg for four as Warriors top two stars were back to the hut in the second over with the total at five.

Ross Taylor left when his reverse sweep found the top edge and hit his own helmet and was caught in the fifth over as they slipped to 7 for 3.

Pooran with Chanderpaul took the score to 60 with a 53-run stand, where the former contributed mostly.

Then Pooran and Keemo Paul (20) added 46 for fifth wicket but once Pooran left, Warriors floundered.