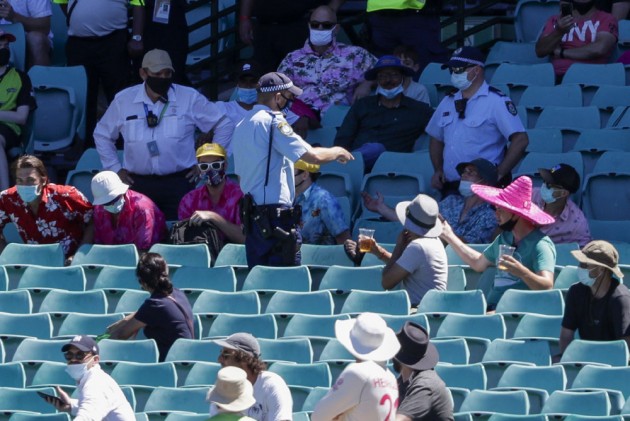 Cricket Australia has told the ICC that it was unable to identify spectators who racially abused Indian players during the Sydney Test and the six who were ejected from the stands were not the real culprits, a media report stated on Tuesday. (More Cricket News)

'The Age' reported that the CA investigators "have cleared the six men ejected from their seats during the Sydney Test of racially abusing Mohammed Siraj."

CA has sent the findings to the ICC after a probe. The ICC had given the body 14 days to lodge a report.

"CA, which is awaiting a final report from NSW Police, is satisfied that the six men who were walked out of the lower tier of the Clive Churchill and Brewongle stand by police on the fourth afternoon of the Test did not make remarks of a racial nature to players," the newspaper said.

"The report (of CA to the ICC) says while they believed players had been racially abused, CA investigators were unable to identify the culprits," it said.

Play was halted for a few minutes on the fourth day of the third Test on January 10 after Siraj complained of racial abuse from the crowd.

This prompted the security personnel to enter the stands and look for the mischief-mongers before six people were asked to leave.

The BCCI had lodged a formal complaint and the CA had offered an unreserved apology.

The newspaper report said CA "interviewed multiple Indian players and took witness accounts from spectators, among them people who contacted CA to volunteer what they saw and heard during the match."

"Sources now say the Indians had warned on the ground that they wouldn't resume play until their complaint was acted upon," the newspaper said.

"CA was told the men were singing to Siraj, who after complaining to umpires then pointed in their direction when police arrived."

The newspaper also claimed one of the six men kicked out had said during the match that Siraj was upset after being hit for two sixes in an over and had gone to umpires when a crowd member said "Welcome to Sydney, Siraj".

In its complaint, the BCCI had alleged that Siraj and his senior pace partner Jasprit Bumrah were abused racially for two consecutive days during the match in Sydney.