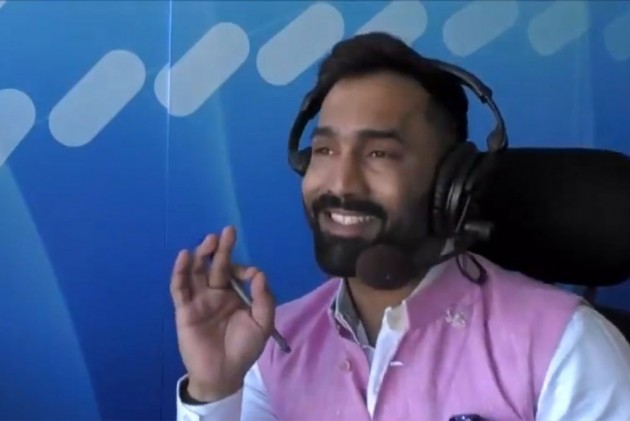 Karthik, 36, was heard saying "batsmen and not liking bats – they go hand in hand... Most of the batters don’t seem to like their bats. They either like another person's bat or... bats are like a neighbour's wife, they always feel better."

His attempt to compare cricket bats with wives didn’t go down well and many have called out the wicketkeeper on social media.

Yo @DineshKarthik, we're always excited to hear your voice in the background of good games and your analysis has been on point but you gotta do better than that misogynistic joke. Perpetuates the same toxic masculinity that doesn't need to exist in sport. A joke in poor taste!

Humor and opinions are subjective. I felt Dinesh Karthik's comments are in poor taste. But since he built this image of most knowledgeable and likeable commentator with stylish outfits, I feel he'll get away easily. Anyone else would've found themselves in trouble.

why is everyone hailing Dinesh Karthik as a great commentator for his sexist and cringe comment comparing a married woman to a bat wtf is wrong with people????

Dinesh Karthik clearly not keen to have his Sky contract renewed ... pic.twitter.com/SYbEKH0Sae

Even if there's a slight possibility that he's taking a dig at his own past & making the larger point about how batters always love to try out other players' bats, That statement is just ew ðÂÂÂ¤¢. Could have been avoided for sure. Expected better from @DineshKarthik #ENGvSL