Australia lost their first game of the Cricket World Cup 2019 by 36 runs to Virat Kohli's India. Shikhar Dhawan hit 117 while Jasprit Bumrah and Bhuvneshwar Kumar took three wickets each at The Oval. 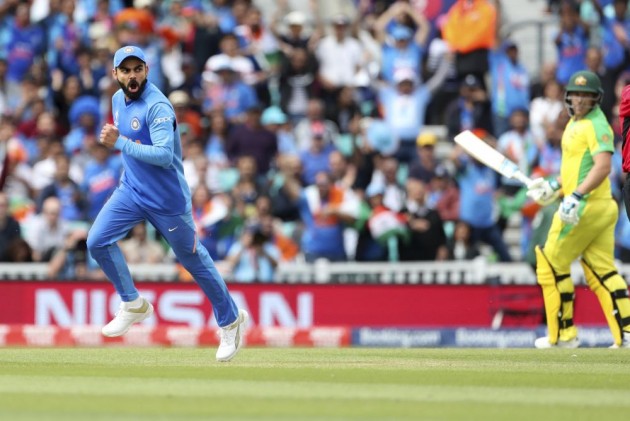 Australian captain Aaron Finch’s best-laid plans were exposed as India slugged their way to victory in a clash of the heavyweights at The Oval. (HIGHLIGHTS | SCORECARD | POINTS TABLE)

The last two ICC Men’s Cricket World Cup winners are no strangers, having played eight one-day internationals against each other already this year.

Honours were even at four games each, with Indian skipper Virat Kohli admitting his team were smarting from a recent series defeat on home soil, revenge ultimately proving a powerful motivation.

Finch hardly revealed a cunning game plan when he said pre-match that the key to beating India - a team blessed with one of the finest top orders in world cricket - was early wickets.

However, saying it and doing it proved two very different things.

For the sixth time Shikhar Dhawan and Rohit Sharma put on a century opening partnership against the Australians, the former going on to score a dazzling 117 while Kohli, Hardik Pandya and MS Dhoni also made valuable contributions as Indian batsmen delivered in style.

They started with caution, seeing off the pace threat of Mitchell Starc and Pat Cummings, and then accelerated in style, scoring 120 runs in their final ten overs to post 352/5, a target that would have needed a Cricket World Cup record to chase down.

“They outplayed us,” admitted Finch. “We didn’t bowl our best stuff and we struggled to get wickets early on, which was always going be important.

“They took their time, assessed the conditions and probably knew Mitchell and Pat were our two biggest threats.

“They swallowed their pride a bit, pulled back a gear and just made sure they got through those first ten overs. Batting that deep into the innings gives them so many options later on, as we saw. They just played really well and negated our biggest threats, it’s as simple as that.”

Finch and fellow opener David Warner seemed to follow a similar strategy in their response, as they started the chase with cautious conservatism.

And one stage Warner, normally such a brute, went 14 deliveries without a run and you could almost feel his frustration bubbling up from the stands.

After 84 balls and 56 runs, nothing was more guaranteed than he’d go out swinging, as he did when Yuzvendra Chahal tempted him down the wicket with a tossed up delivery, caught on the boundary by Bhuvneshwar Kumar.

With the required run rate now racing upwards over 11, India gleefully took advantage as Australia were forced to push the pace, wickets falling with regularity.

In the end they were only 37 runs short of the target but, in truth, they were never really in the match - the scorecard not necessarily telling the full story of India’s dominance across all departments.

“I thought they bowled really well with the new ball,” added Finch. “I thought we could do some damage at the back end of the innings, if we had some wickets in hands.

“I thought we were in a decent position but we lost our wickets at key times. They also bowled really well, they didn’t give us any length or width to work with. It was a pretty simple strategy but it was effective.”

Australia will have three days reflect on this performance before their next match with Pakistan at Taunton.

“There’s no panic, we’ve started off well with a couple of wins and it’s just a small hiccup,” he added.

“We will assess every option. We know Pakistan have quite a few left handers on their side and there’s not been enough games at Taunton to get a read on what the wicket will look like yet.”