India continued their unbeaten run in the Cricket World Cup 2019 with a 125-run victory against West Indies after Mohammed Shami took another four wickets in Manchester. 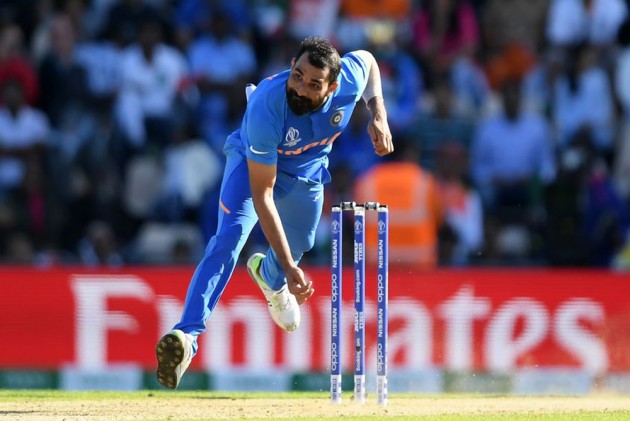 Mohammed Shami knows better than most just how devastating a batsman Chris Gayle can be, and the Indian quick used some inside information to strike the decisive blow in victory at Old Trafford. Shami has enjoyed a dream return to the Indian side, following up his hat-trick against Afghanistan with figures of 4/16 in the 125-run victory over the West Indies. That success leaves India just one win away from the semi-finals, while the Windies are out of the running to make the final four.

And it was the wicket of Gayle, Shami’s Kings XI Punjab teammate in the IPL, for just six that was the crucial blow for India as Mohammed Shami cramped him and forced him to mistime a pull.

Shami explained: “Chris Gayle and I were together during the IPL. Once you play, you get an idea. The one thing that I thought was that if I didn’t allow him to open his arms, then it would be good because at some stage, he would go for it.”

It has been an unlikely return to the biggest stage for Shami, who has stepped up in the absence of the injured Bhuvneshwar Kumar. He has taken four wickets in each game, also cleaning up Shai Hope early in the win over the West Indies.

That completes a long journey for the 28-year-old who had lost his place in the team over fitness concerns in 2018.

He added: “I failed (the yo-yo test), that’s true. But the one thing is I have improved my fitness a lot. I am in my comfort zone, I have lost weight, my rhythm is good.

“Everything is going well. I am trying to ensure that that rhythm, that diet that I have been following, I maintain it.

“The moment I lost weight, I found a rhythm for myself, there is a good feeling. Along with that, you feel a force, there is less tiredness so obviously the speed will increase.

“As far as skill is concerned, I have full faith in myself that whatever be the wicket I can express my abilities.

“I have always had confidence in my skills whenever I come onto the field and whenever I have been given responsibility, I have been successful in fulfilling that.

“That adds to my confidence. I have the belief that I can do it. I stay ready when I get my chance so that I can execute my skills.”