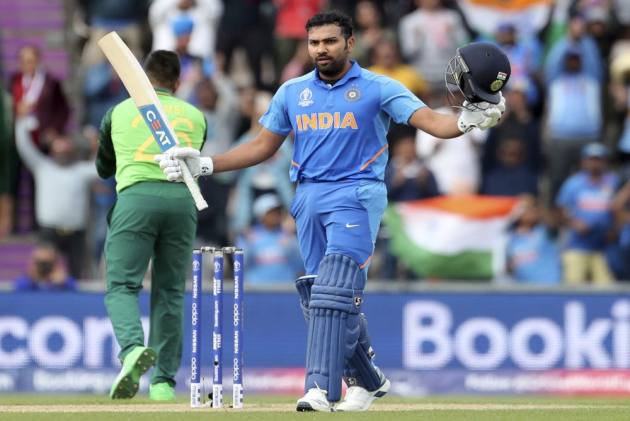 Rohit Sharma curbed his natural flair for a greater good as his gritty hundred complemented a superb bowling effort in India's resounding six-wicket victory over a hapless South Africa in their 2019 Cricket World Cup opener at The Rose Bowl, Southampton on Wednesday. (HIGHLIGHTS | SCORECARD | FULL SCHEDULE)

It was an uncharacteristic 23rd ODI hundred for the Indian vice-captain (122 no off 144 balls) in a successful chase of 228 in conditions that were not exactly conducive for free-flowing strokeplay.

It might have taken India 47.3 overs to complete the chase but not for once were they in any sort of trouble.

It did help that a bowling attack with a lone ranger in Kagiso Rabada (10-1-39-2) couldn’t have defended a 227-run total but nobody can take away the fact that conditions remained overcast throughout with the extra bounce causing discomfort for most of the established batsmen.

For South Africa, everything went wrong from the start as skipper Faf du Plessis first surprised everyone by deciding to bat first and then dropped Rohit in the slips when he had barely got off the mark.

Once Du Plesses dropped Rohit, he played a ramp shot to add salt to the wound. In all, he hit 13 fours and two sixes. The Indian opener was given a second life towards the end of the chase with David Miller dropping a regulation catch.

The bowler on both occasions was Rabada, whom the Indians played cautiously while attacking the others. With no Dale Steyn and Lungi Ngidi, it would have been difficult for a second string attack to contain the Indian batsmen.

With the scoreboard pressure not being there, Rohit and KL Rahul shared an 85-run partnership and later Rohit and Dhoni, who added 74, could afford to wait for the loose balls.

Du Plessis’ decision to bat under overcast conditions backfired with Bumrah setting the tone with twin blows in his opening spell.

Chahal then tightened the noose on South African batsmen as they could never really force the pace during the middle overs. Incidentally, this was the best 10-over single spell (in terms of wickets taken) by any bowler in a World Cup game.

South Africa's total got some semblance of respectability courtesy Chris Morris (42 off 34) and Rabada (31 not out off 35), who shared a much needed 66-run stand for the eighth wicket.

Bhuvneshwar Kumar (10-0-44-2) coming in place of Mohammed Shami was impressive in his second spell.

Under a thick cloud cover and a pitch that offered bounce, Bumrah was unplayable in his initial five over spell where he pitched on good length or back of it, getting the deliveries to rear up awkwardly and shape away from openers De Kock and Hashim Amla.

Bumrah dismissed Amla (6) with a beautiful delivery that rose from length outside the off-stump and the outside edge was taken low in the slips by Rohit Sharma.

De Kock (10) was out in his next over when his back of length delivery was angled across and the left-hander’s slash was pouched by skipper Virat Kohli at the third slip.
Skipper Du Plessis (38 off 54 balls) and Rassie van der Dussen (22 off 37 balls) did add 44 runs for the third wicket but it was more of a consolidation job as they found scoring runs difficult.

The Powerplay yielded only 34 runs and even though the Proteas skipper hit four boundaries, he never looked comfortable.

Third seamer Hardik Pandya (6-0-31-0) also hit the hard lengths and one of his deliveries, a nasty snorter, hit Du Plessis flush on the gloves, leaving him in pain. Along with Kedar Jadhav (4-0-16-0), they shared the fifth bowler’s duties admirably giving away only 45 runs.

Once Chahal and Kuldeep Yadav (10-0-46-1) started operating in tandem, something was always waiting to happen.