Jofra Archer, who made England debut earlier this month, has so far played three ODIs. Often regarded as one of the best pacers in the world, the 24-year-old has the ability to clock 140 kmph regularly and is known for producing accurate yorkers. 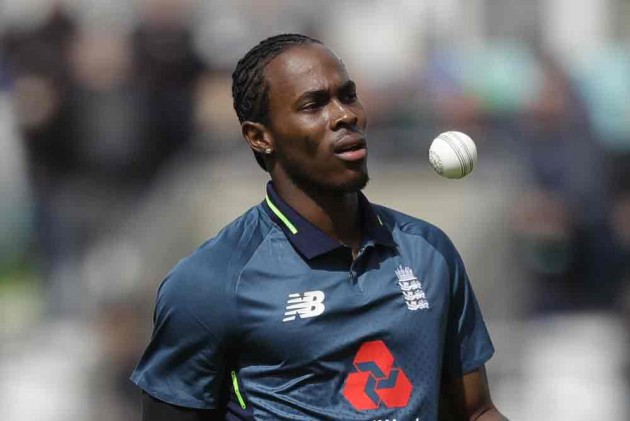 Hosts England have named all-rounder Bridgetown-born Jofra Archer in their final squad for the Cricket World Cup 2019 on Tuesday. Initially, the all-rounder was not included in the provisional squad. Another late entrant into the 15-member squad is left-arm spinner, Liam Dawson.

Archer, who made England debut earlier this month, has so far played three ODIs. Often regarded as one of the best pacers in the world, the 24-year-old has the ability to clock 140 kmph regularly and is known for producing accurate yorkers.

To accommodate the duo, England have dropped pacer David Willey and allrounder Joe Denly. Earlier, Alex Hales was withdrawn from the preliminary squad for off-field disciplinary issues involving recreational drug use. The opener has been replaced by James Vince.

England, chasing their maiden World Cup title, will take on South Africa in the opening match of the mega event on May 30 at The Oval, London.

Archer edged out left-arm quick Willey, a veteran of 46 ODIs, after both pacemen featured during England's 4-0 series win at home to Pakistan which concluded Sunday.

There was no place also in a squad for back-up spinner and batsman Denly, with Hampshire slow left-armer Dawson -- who did not feature against Pakistan -- recalled as cover for Adil Rashid, who is nursing a shoulder problem.

Vince came in after England decided against selecting Hales following the Nottinghamshire batsman's ban for recreational drug use.

Archer only became qualified for England in March and fast-tracked into the national side.

England reduced their qualification period from seven years to three, a move they insisted was solely to bring them into line with the rest of the world rather than advance the selection of paceman Archer -- whose father is English.

Even though Willey offered a different angle of attack as the only left-arm quick in contention, Archer's ability to bowl at 90 mph -- and his variety of slower balls -- has seen him get the nod.

Willey, who has helped England climb to the top of the ODI rankings following their first-round exit at the 2015 World Cup, was among those who questioned the prospect of Archer playing for England at this year's edition when the Sussex quick became eligible in March.

"It's a group of players that have been together for three or four years that have got us to number one," said Willey, the son of former England batsman Peter Willey.

"And there's a reason for that. Whether someone should just walk in at the drop of a hat because they are available, whether that's the right thing, I don't know." England are bidding to win the World Cup for the first time.

They now have two warm-up matches, against Australia in Southampton on Saturday and Afghanistan at The Oval on Monday.