Cricket World Cup 2019: The Stats That Spell Out England's Transformation

England's batting in ODIs has been transformed since the 2015 Cricket World Cup and here's a look at the numbers that highlight their improvement. 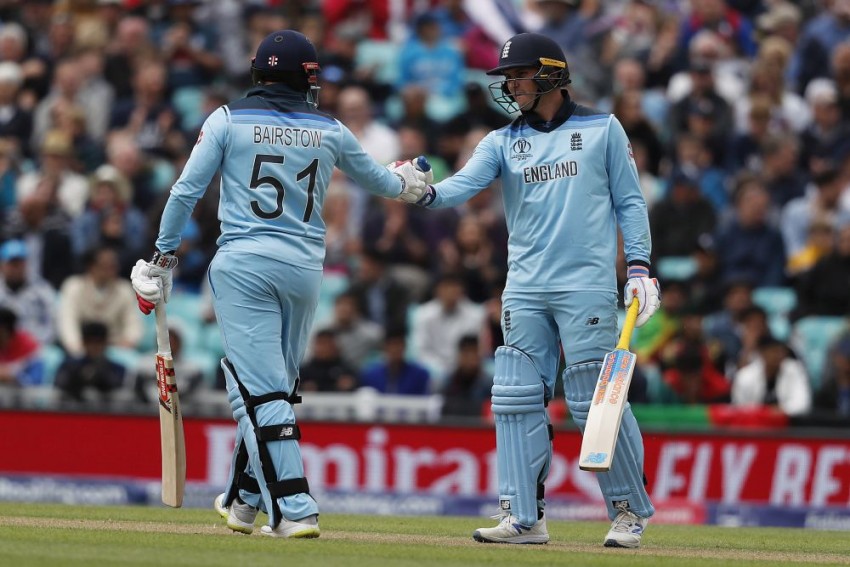 Jason Roy (R) has hit eight ODI centuries since the 2015 Cricket World Cup. Jonny Bairstow, on the other hand, has gone past the three-figure mark seven times since September 2017.
AP
Outlook Web Bureau May 28, 2019 00:00 IST Cricket World Cup 2019: The Stats That Spell Out England's Transformation 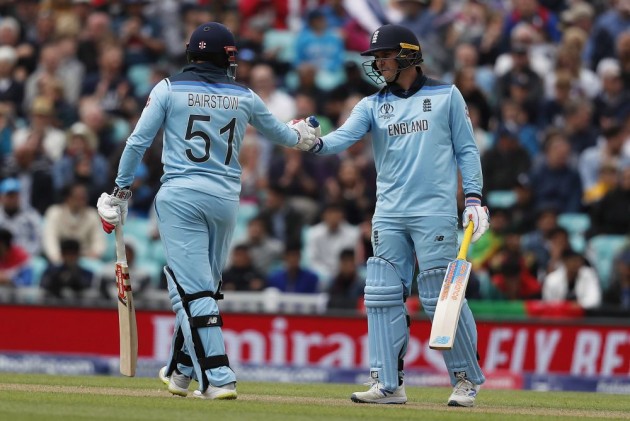 Just over four years have passed since England's ODI side suffered one of their lowest moments with a humiliating group-stage exit from the 2015 Cricket World Cup.

An abject campaign in Australia and New Zealand saw England thrashed by both host nations and Sri Lanka, before defeat to Bangladesh sealed their elimination.

The primary problem was not hard to identify.

England looked like a team stuck in the past as they frequently failed to score quickly enough with the bat, seemingly believing 300 still represented a healthy target even though far greater totals were being routinely tallied up by their rivals.

Fast forward to the present day and the situation could hardly be more different. Eoin Morgan, who took over as captain just before the doomed 2015 campaign, has overseen a remarkable transformation and his men will kick off this year's tournament on home soil as favourites to claim glory.

Ahead of their tournament opener against South Africa at The Oval on Thursday, we take a look at the statistics that spell out England's dramatic batting improvement in the 50-over game.

Since the 2015 tournament, England have surpassed 325 on 23 occasions  - often by a huge margin - and twice set a new world record in ODIs by improving on Sri Lanka's mammoth total of 443-9 against the Netherlands, which had stood as the benchmark for more than a decade.

Morgan's side plundered 444-3 versus Pakistan at Trent Bridge in 2016, before raising the bar considerably at the same venue last June with a scarcely believable tally of 481-6 against Australia.

Even accounting for the fact scoring rates as a whole have risen in the past four years, the development from England has been incredible. A team boasting the likes of Jason Roy, Jonny Bairstow and Jos Buttler may fancy its chances of threatening 500 over the coming weeks.

MORE THAN TWICE AS MANY HUNDREDS

Unsurprisingly, England have been far more productive in terms of individual century-making during this period of heightened scoring.

In the four years leading up to the 2015 World Cup, England players managed a combined total of 20 ODI hundreds. Ten of those innings were compiled at quicker than a run a ball.

The figures since 2015 show another huge improvement, with the team piling up 48 tons, including 37 at quicker than a run a ball.

Each of England's six fastest centuries have come since the last World Cup, with Jos Buttler responsible for the two quickest, reaching three figures off 46 and 50 deliveries respectively.

England's highest individual score between the 2011 and 2015 World Cups came just before the latter tournament began, Ian Bell striking 141 against Australia in Hobart.

That innings has since been topped on five occasions, while Robin Smith's long-time England ODI record score of 167 has also been overhauled.

Alex Hales struck 171 as part of the aforementioned run-fest against Pakistan in 2016, before Roy thumped 180 in Melbourne last January versus Australia.

Hales, who accounts for three of England's 10 highest scores since the last World Cup, will play no part in this year's tournament after being axed from the squad, but England are still set to have two hugely dangerous openers at their disposal.

Roy will be partnered by Bairstow, a similarly aggressive batsman with seven ODI hundreds since September 2017.