Virat Kohli insisted he didn't want India fans to "set a bad example" after asking them to take it easy on Steve Smith. The former Australia captain was subjected to chants of 'Cheater!' by supporters during the Cricket World Cup encounter between the two teams at The Oval on Sunday. 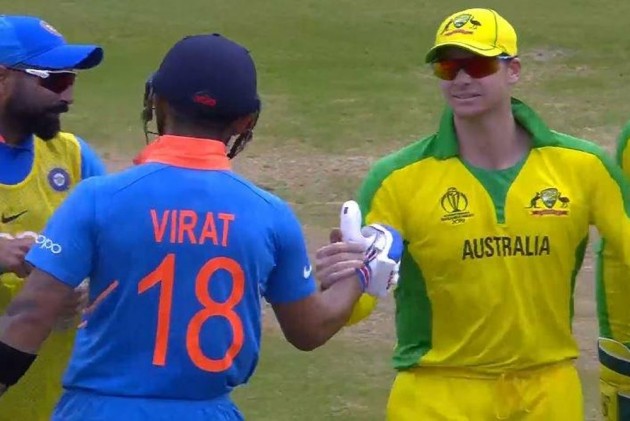 Indian skipper Virat Kohli says he apologised to Steve Smith on behalf of the fans after the former Australia skipper coped another round of "unacceptable" booing in the ongoing 2019 Cricket World Cup. (HIGHLIGHTS | SCORECARD | FULL SCHEDULE)

Back after serving a one-year suspension for the infamous ball-tampering scandal in South Africa, Smith, despite a string of impressive performances, has been getting a hostile reception at every English ground at the marquee event.

During the clash with India here on Sunday, which Australia lost by 36 runs, the Indian fans booed Smith and chanted "cheater, cheater" when the defending champions were fielding. Kohli urged them to calm down and instead cheer his batting.

"I just felt for him, and I told him, 'I'm sorry on behalf of the crowd because I have seen that happen in a few earlier games as well'. In my opinion, that's not acceptable," the Indian captain said.

"Just because there are so many Indian fans here, I just didn't want them to set a bad example, to be honest, because he didn't do anything to be booed in my opinion. He's just playing cricket," Kohli said at the end of the match.

Kohli and Smith have had their run-ins in the past including the infamous 'Brain fade' controversy during a 2017 Test match in Bengaluru, when Smith was seen seeking help for a referral from the dressing room. The home captain was left fuming during that time.

But on Sunday, the two were seen shaking hands after the former gestured the fans to show some restraint.

"He (Smith) was just standing there, and I felt bad because if I was in a position where something had happened with me and I had apologised, I accepted it and I came back and still I would get booed, I wouldn't like it, either," he said.

For Kohli, if someone has shown repentance then others should let go of the baggage and move on.

"Look, I think what's happened has happened like long back, the guy is back. He's trying to play well for his side.

"Even in the IPL, I saw him, it's not good to see someone down like that, to be honest," Kohli said.

Kohli acknowledged the differences he has had with Smith in the past.

"We've had a few arguments on the field. But you don't want to see a guy feeling that heat every time he goes out to play.

"What's happened has happened. Everyone has known that. He's come back. He's worked hard. He's playing well for his side now," the skipper said.