With an unbeaten record in six encounters so far, India are all but through to the semi-finals with 11 points but a win against England will further tighten their grip at the top and in the process oust World's No 1 ODI team from the Cricket World Cup. 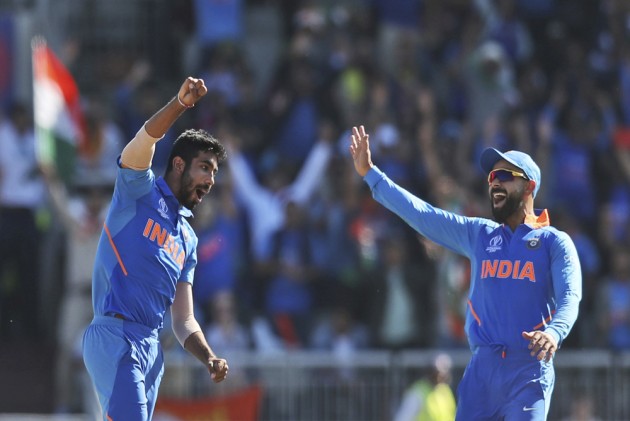 With an unbeaten record in six encounters so far, Virat Kohli's men are all but through to the semi-finals with 11 points but a win against England will further tighten their grip at the top and in the process oust World's No 1 ODI team from the global event.

Not long ago, England were considered to be favourites to win the tournament but Eoin Morgan's men have bungled big time in crucial games, which has now brought them at the verge of exit with only six points from seven games.

It is hard but it seems as if the 'Sky Blue' of England has been covered by thick grey cloud with no silver lining in the horizon.

It is indeed tragic that England's best ODI team in recent history with the likes of Captain Morgan, Jos Buttler, Jonny Bairstow, Ben Stokes, Jofra Archer in their ranks are facing an imminent exit.

Sunday's encounter at Birmingham's Edgbaston with a capacity Indian crowd could be rather unsettling for a team which is already under severe pressure from all quarters.

"People were waiting for us to fail," Bairstow told reporters.

"They are not willing us on to win, in many ways, they are waiting for you to get that loss, so they can jump on your throat. It's a typical English thing to do, in every sport," Bairstow's comments prior to the India game didn't go down well with Vaughan, who countered, calling it a "negative, pathetic mindset" in an Instagram post.

For India, possibly, it couldn't have been a better time to square off with the Poms who could again be unsettled by conditions which is expected to be predominantly sub-continental.
There's bright sunshine, the baked pitch on the drier side with promise of more turn than usual.

Playing two wrist spinners in these conditions along with a lethal Jasprit Bumrah could well spell doom for an English side, which has fluffed its lines while chasing against Pakistan, Sri Lanka and Australia.

In fact, Morgan's approach of moving towards leg stump against a fast and furious Mitchell Starc during Lord's game prompted Kevin Pietersen to question whether the skipper is "scared".

England, however, could take solace from the fact that they beat India 2-1 in their last bilateral series at home but an injured Bumrah didn't feature in that series.

The Indian team, however, will not be over strategizing about the English team as pacer Mohammed Shami pointed out.

"Rather than thinking about opposition, it is better that we focus on our own skills. If our skill level is good, we would not need to even think about the opposition," Shami, who has taken 8 wickets in 2 games, said after mauling the West Indies.

The best part about Indian team is that they haven't yet played their best cricket and yet have been able to win games with consummate ease. The middle-order batting still remains a concern and Vijay Shankar's performance at number four certainly makes him a weak link.

The team management has shown no inclination to field the exciting Rishabh Pant so far.

"They have invested in a youngster like Shankar. The team management feels he is important to their plans so no harm in persisting with him. Moreover the team is winning handsomely so they have the right to continue with a winning combination," former skipper Sourav Ganguly said during a chat with PTI.

ALSO READ: Five Talking Points From New Zealand Vs Australia As Both Sides Have An Eye On Cricket World Cup Semis

It was a young Ganguly, who wrote England's epitaph with an all-round show at this very ground at the 1999 World Cup.

It could well be a Rohit Sharma, Kohli or a Hardik Pandya, who will put the final nail in English coffin this time around.