India loss to England in the ongoing Cricket World Cup, which has hurt Pakistan's semi-final hopes. Former skipper Waqar Younis took to Twitter to question Virat Kohli's side's sportsmanship which didn't sit well amongst the fans, who lashed back at him. 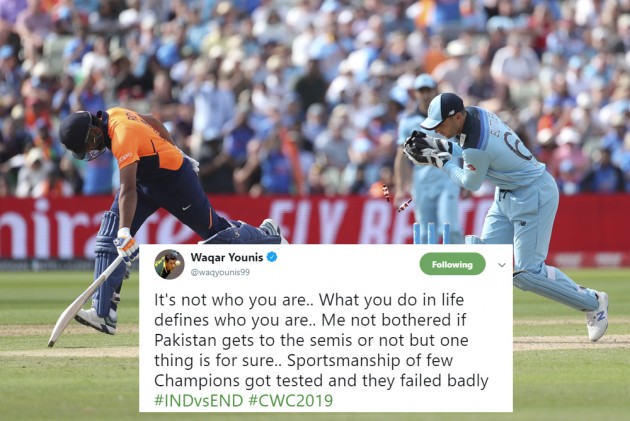 India crashed to their first Cricket World Cup 2019 defeat to England on June 30, at Edgbaston. The result also put England back into contention for the race to semi-finals, as they edged past Virat Kohli's side in a 31-run victory. Meanwhile, Pakistan's hopes were also pinned on that fixture, and they needed the Men in Blue to win, but now it has become tougher for the Green Army. Former Pakistan captain Waqar Younis took to Twitter on July 1, to question India's sportsmanship, and guess what, he faced the brunt of trolls.

He had tweeted, "It's not who you are.. What you do in life defines who you are.. Me not bothered if Pakistan gets to the semis or not but one thing is for sure.. Sportsmanship of few Champions got tested and they failed badly."

It's not who you are.. What you do in life defines who you are.. Me not bothered if Pakistan gets to the semis or not but one thing is for sure.. Sportsmanship of few Champions got tested and they failed badly #INDvsEND #CWC2019

Did you expect 1987 WC .. Walsh’s act went on to cost West Indies a semi-final berth & Pakistan sailed into it ? An exotic carpet gifted to him later by your President Zia-ul-Haq. You expect Sportsmanship from other teams when your players are match fixers & fail doping test.

How can you make such allegations ?

When you team plays badly consistently at the start of the CWC that time u didn’t suspect any foul play ??

Very irresponsible tweet. Who are u pass such judgement? If ur team suspect any foul play, lodge a complaint with ICC, let them investigate. There are hundreds of instances where ur team have collapsed like a pack of cards from a winning situation. Shall we pass the judgement?

Waqar. I've got a huge amount of respect for you as you know. But that tweet is inflammatory and quite frankly irresponsible.
As soon as Hardik was out India knew chances of a win were gone and protected their NRR.
It's a tournament.
Not everyone is out to get you!

Who is Talking abt Sportsmanship
Delhi Test 99
Wasim- Kumble had 9 wickets. Me & Waqar in Crease.
Waqar- How about run out? so that he doesnt get his 10th wicket.
Wasim-You cant deny him the feat if he is destined for it. But I can assure u tht I’m not gonna Gift my wicket to Him

Your team lost to the garbage WI team . Think about it before blaming others .

Pakistan are currently fifth in the standings, meanwhile England are fourth.

Sarfaraz Ahmed's side face Bangladesh in their last group fixture, which is a do-or-die clash and other results need to go their way.