Often regarded as one of the fiercest competitors, Virat Kohli showed commendable sportsmanship by standing up for his bete noire Steve Smith during the 14th match of the ICC Cricket World Cup 2019 between India and Australia at The Oval, London on Sunday 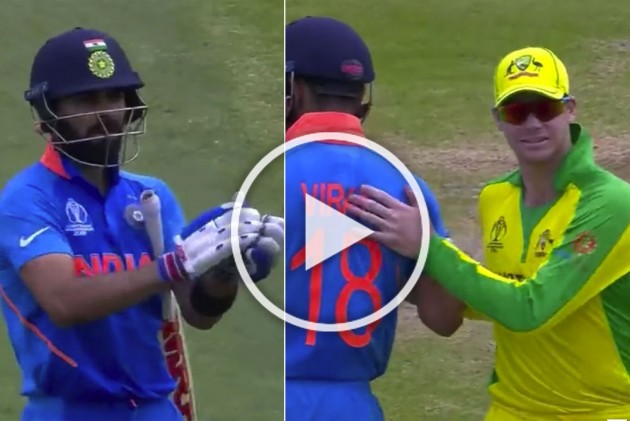 During India's second ICC Cricket World Cup 2019 match against Australia, Virat Kohli showed his compassionate side by helping his bete noire Steve Smith from the jeering Indian fans at The Oval, London on Sunday.

Kohli, who has had a series of confrontations with the former Australian captain, left the batting crease to stop fans booing Smith. The India captain won hearts on social media for his special gesture and sportsmanship spirit.

With India fans giving Steve Smith a tough time fielding in the deep, @imVkohli suggested they applaud the Australian instead.

After the match, which India won by 36 runs, Kohli said that such a thing was not acceptable.

"I just felt for him (Smith) and I told him sorry on behalf of the crowd because I have seen that happen in a few earlier games as well. In my opinion that's not acceptable," he told reporters at the post-match press conference.

Both Smith and his erstwhile deputy, David Warner served a ban of one year for their role in the infamous sandpaper-gate scandal in South Africa last year.

"What happened, happened long back. He's back, trying to play well for his side. Not good to see someone down like that...You don't want to see a guy feeling heat every time he goes out to play," Kohli said.

What happened at The Oval?

As India and Australia locked horns at The Oval in London today, Indian batsmen, including Kohli, were smashing the Australian bowlers for runs. In between the overs, Smith was sent to the boundary line. It was at that time that some Indian fans started booing at him and chanted "cheater, cheater".

Kohli, who was batting at that time, took notice of it and was clearly not happy with the fans' gestures. Showing his classy side, the Indian captain turned towards the stand and gestured at the fans to cheer for Smith and not boo at him.

What was Smith's reaction?

The Indian skipper's act was appreciated by Smith, who came up to him, shook his hand and patted him on the back during the drinks break. The two players have had their share of bitter banter in the past.

"There are many Indian fans here, I didn't want them to set a bad example because he (Smith) didn't do anything to be booed. I felt bad because if I was in a position where something happened and I had apologised, accepted and came back, still I get booed I wouldn't like it either," Kohli said.