After facing their first defeat of the ongoing Cricket World Cup, New Zealand will be hoping to get back on winning terms in their upcoming clash against Australia on June 29, at Lord's. 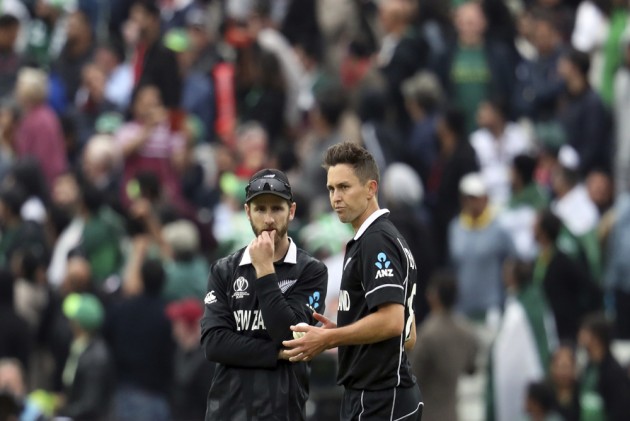 Peaking at the right time, Australia will resume their Trans-Tasman rivalry at the World Cup stage when they take on a New Zealand side low on confidence after its first defeat of the tournament. The match is scheduled for June 29, at Lord's.

Barring the defeat against India, defending champions Australia have done nothing wrong in this tournament, becoming the first team to qualify for the semifinals.

The Aaron Finch-led side is in roaring form and would look to continue the winning momentum at the hallowed Lord's.

New Zealand go into the match after suffering a defeat against Pakistan, which snapped their unbeaten streak in the tournament.

The Black Caps -- who have amazingly retained the same side for all their seven matches -- have secured 11 points and need at least a win from their remaining two outings -- against Australia and England (July 3) -- to be assured of a fourth straight World Cup semifinals berth.

They met in the 2015 final at the MCG and with memories of that game still fresh, Saturday's match may turn out to be a cracker.

The Trans-Tasman rivalry is heavily skewed against New Zealand with Australia having won all but one of the 20 ODIs played outside the two countries. The only win for the Black Caps in a neutral venue have come in the 1999 World Cup match at Sophia Gardens.

That win in 1999 has also been the lone victory for New Zealand in seven World Cup matches between the two sides.

Not only history but current form of the players also point to five-time champions Australia beginning as the favourites.

Australia swept past hosts and world number one England by 64 runs in their last match and currently look like one of the two sides most likely to lift the trophy, the other being India.

Finch and David Warner have been the dominant opening duo of this tournament and are on track to become the greatest ever pair at the top in a World Cup.

They rank first and second in the run-scoring lists, and have put on a record-equalling three century stands with two league games still to go.

Fast bowler Mitchell Starc is topping the bowling charts with 19 wickets at 18.26. He's caused New Zealand batsmen headaches before with his bounce, swing and pace.

Jason Behrendorff also came good with the new Kookaburra ball in the win over England as the left-armer took 5/44.

New Zealand will again rely heavily on captain Kane Williamson who has scored 414 runs at 138 in five innings. His lone century against Australia came when they last met, at the Champions Trophy in 2017, a contest that was washed out.

The match starts at 6 PM.