South Africa finally produced the brand of cricket they are known for to register a consolation win over Sri Lanka in their penultimate match of the ICC Cricket World Cup 2019 at Chester-le-Street's Riverside Ground on Friday, leaving former champions on the brink of elimination 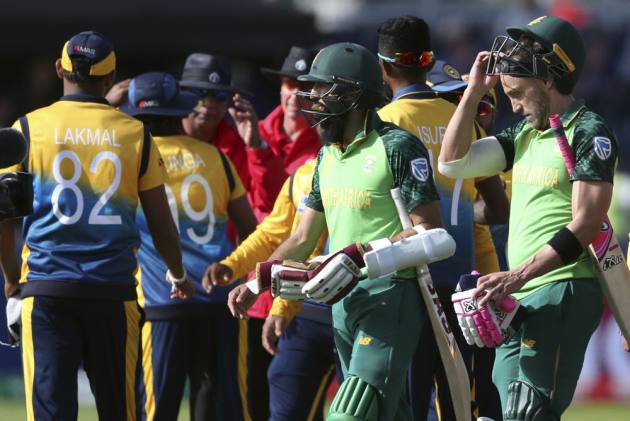 Former champions Sri Lanka are all but out of the ongoing ICC Cricket World Cup 2019 after suffering a nine-wicket drubbing against a clinical South Africa at Riverside Ground, Chester-le-Street on Friday. Proteas bowlers dished out a fine bowling effort to bowl out the former champions for a lowly 203, then chased it down comfortably for a nine-wicket win.

Opting to bowl, the Proteas picked up wickets at regular intervals after the first 10 overs to never allow the Sri Lankan middle-order settle down.

Drafted into the playing eleven in place of Lungi Ngidi, pacer Dwaine Pretorius (3/25) justified his selection with a three-wicket haul.

Sri Lanka had a horrible start as they lost skipper Dimuth Karunaratne in the first ball of the match, caught by his counterpart Faf du Plessis at the second slip off Rabada.

Thereafter, Kusal Perera (30 off 34) and Avishka Fernando (30 off 29) took the counter-attacking approach and played fearlessly to stitch a 67-run stand off 58 balls before the duo perished in quick succession.

Right-arm pacer Pretorius sent both the batsmen packing in consecutive overs as Sri Lanka slumped to 72 for three in 11.3 overs.

New man Angelo Mathews looked in no hurry and took 29 balls to score his 11 runs before he played on a Morris delivery in the 22nd over.

Kusal Mendis (23 off 51) had to dug deep for his runs before he became Pretorius' third victim, spooning one to Morris at extra cover.

Dhananjaya de Silva (24) , Jeeva Mendis (18) and Thisara Perera (21) all got starts but threw away their wickets when Sri Lanka needed them to carry on.