Cristiano Ronaldo hit the 700-goal mark for club and country on Monday, but had mixed feelings following Portugal's 2-1 loss to Ukraine in the Euro 2020 qualifying. 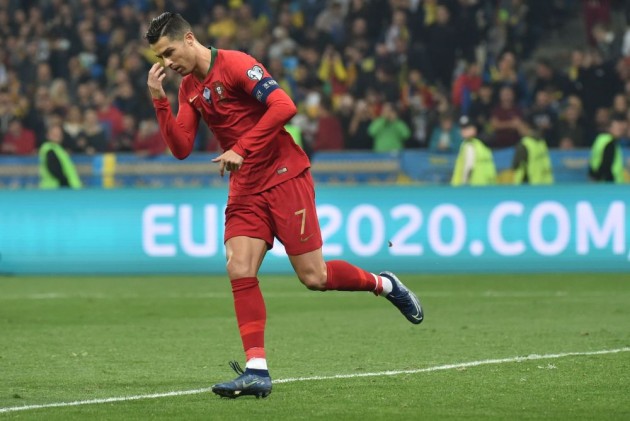 Portugal and Juventus forward Cristiano Ronaldo insisted he is not obsessed with breaking records as they come naturally for him after scoring his landmark 700th career goal.

Ronaldo bagged a consolation penalty in the second half of Portugal's 2-1 Euro 2020 qualifying defeat to Ukraine in Kiev on Monday (October 14).

The 34-year-old superstar made no mistake from 12 yards after Taras Stepanenko was penalised for handling the ball inside the box, but it was not enough for Portugal as they lost for the first time since the 2018 World Cup. (FOOTBALL NEWS)

Defeat for Portugal at the Olympic Stadium made the occasion bittersweet for Ronaldo, who is now part of an elite list of players to have reached the milestone figure.

"Not just anyone can reach this figure," he told reporters. "Thank you to my team-mates, colleagues and coaches who have helped me to become the player I am.

"I am disappointed that we didn't win, but proud of the team."

700 - Cristiano Ronaldo has scored his 700th career goal for club and country:

Reflecting on his personal achievement, Ronaldo added: "How many records do I have? I don't know. I have to enjoy the moment and thank those who helped me reach this impressive mark.

"The last time I played at this ground I won the Champions League, a beautiful moment that is in the past. Today we played well but couldn't win.

"Records come naturally - I don't go looking for them; records are looking for me! Without having an obsession, they happen naturally."

Portugal entered Monday's clash with Group B leaders Ukraine on the back of a 13-match unbeaten run in all competitions, including victories in their last five matches.

The European and Nations League champions were two goals down inside half an hour, however, with Roman Yaremchuk and Andriy Yarmolenko ensuring Ukraine's place in the Euro 2020 finals.

Fernando Santos' men may now need victories over Lithuania and Luxembourg in their final two matches to hold off third-placed Serbia, but Portugal's head coach claimed his side were hard done by.

"We started well with a couple of chances, then they went and scored," Santos told RTP. "We tried to react, but whenever Ukraine went forward we had difficulties.

"At half-time I tried to rectify things and we improved, but we went into the break with an unfair scoreline - it should have been 2-1 and not 2-0.

"We played a lot with our hearts and less with our heads. I asked them to play more with their heads [in the second half] and be stronger defensively, while keeping our concentration.

"Now we have to win our next two games, which are like finals."