Cristiano Ronaldo, who slotted home the opener after his penalty was saved, was withdrawn for Alvaro Morata with Juventus leading 2-1 against Inter Milan 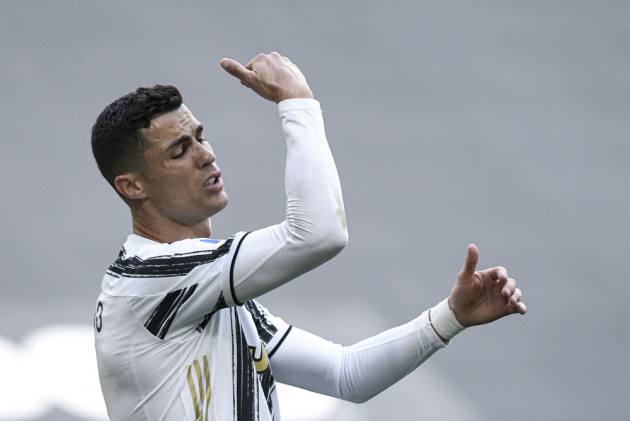 Andrea Pirlo claimed Cristiano Ronaldo was happy to be substituted with 20 minutes remaining of Juventus' pulsating 3-2 win over champions Inter in the Derby d'Italia on Saturday.  (More Football News)

The Portuguese superstar – who slotted home the opener after his penalty was saved – was withdrawn for Alvaro Morata with the Bianconeri leading 2-1 after Juan Cuadrado had restored the hosts' lead following Romelu Lukaku's leveller from the spot.

Rodrigo Bentancur was dismissed for the hosts after just 55 minutes for picking up two yellow cards and intense Inter pressure finally told seven minutes from full-time when Giorgio Chiellini bundled into his own net.

There was to be one final twist, though, as Cuadrado powered home from the spot in the 88th minute after he had been brought down inside the area by Ivan Perisic.

The result moved Juve into the top four, although they could be usurped ahead of next weekend's final matchday if Napoli overcome Fiorentina on Sunday.

It was just the third time Ronaldo has been substituted this season, but Pirlo was adamant his talisman took the withdrawal well.

"I think it was the first time he was happy to be subbed off," he told Sky Sport Italia. "We were one man down, and he'd have been chasing shadows. He was happy and smiling in the dressing room."

It has been a dismal first season in charge for Pirlo, with a Champions League last-16 exit followed by a tepid surrender of their nine-year stranglehold on the Serie A crown to Inter.

It remains to be seen whether he will still in charge for the 2021-22 campaign but, if he stays, Pirlo wants to see more of the spirit shown in the win over Antonio Conte's side next term.

"We should have had the same determination and desire to fight on every ball also in the other games of the season," he added.

"If we had done so, we would not be fighting for a top-four finish at this point. We made too many mistakes in games that seemed easy on paper.

"We've asked ourselves many times what we've lacked this season. We didn't have the same fire burning inside. We had to turn the light on again to fight the title and a top-four finish. The lads have proved they are up to the task in big games.

"This group has a lot to give, we have many young players, but playing for Juventus means having more responsibility. It takes time to adapt.

"We shouldn't have dropped so many points, but this is a good team, we have room for improvement, there is a good base to work well."

Juve finish their campaign with a trip to Bologna next week.