Inter will be crowned champions if Atalanta fail to beat Sassuolo on Sunday after they overcame Crotone, who were relegated 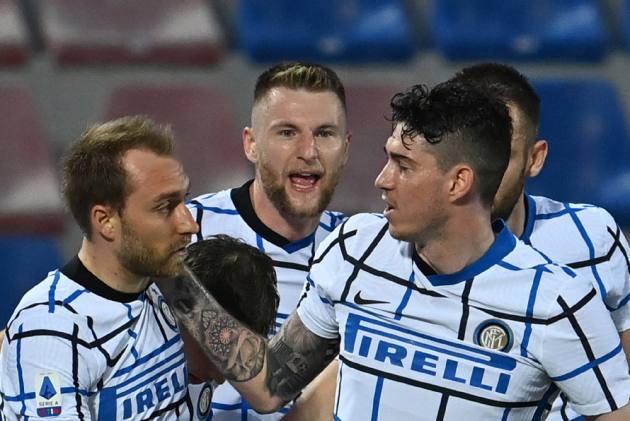 Christian Eriksen and Achraf Hakimi put Inter on the brink of securing the Serie A title with second-half goals in a 2-0 victory at Crotone. (More Football News)

The runaway leaders had been frustrated against a side whose long-awaited relegation was confirmed by this result until Eriksen struck just a few minutes after coming on midway through the second half on Saturday.

Romelu Lukaku struck the woodwork and had a goal ruled out, while Lautaro Martinez hit the post, but Eriksen opened the scoring with a deflected drive and Hakimi sealed all three points with the last kick of the game.

Victory at Stadio Ezio Scida ensured the Nerazzurri will end an 11-year wait to win a Scudetto if second-placed Atalanta fail to win at Sassuolo on Sunday.

Adam Ounas forced a save from Samir Handanovic and Stefano Sensi's shot deflected wide at the other end in a frantic start.

Sensi was denied by Alex Cordaz from a tight angle when the midfielder was presented with another early opportunity before he whipped in a corner that Lukaku headed against the post.

Martinez's right-footed strike rattled off the inside of the post and Cordaz palmed away another effort from Sensi as the Nerazzurri somehow failed to open the scoring in the first half.

Battling Crotone got everyone behind the ball in what resembled a training exercise with Inter continuing to probe after the break, Sensi's scuffed strike gathered by Cordaz after his free-kick struck the wall.

Antonio Conte made a triple substitution after 65 minutes and Eriksen made just the impact he was hoping for soon after coming on.

Lukaku showed great strength before laying the ball off to the Denmark midfielder, whose right-footed drive from around 20 yards out deflected into the corner of the net.

Leading scorer Lukaku had a goal disallowed for offside seven minutes from time but Hakimi put the icing on the cake with a second goal right at the end, finishing off a counter-attack with a clinical finish.

What does it mean? Inter have one hand on Scudetto

It has been the case for a number of weeks that it should only be a matter of time before Inter are confirmed as champions.

They could officially dethrone Juventus on Sunday after their persistence paid off against a Crotone side who are bound for Serie B.

Inter are 12 points clear with four matches to play and unbeaten in 18 Serie A games, their longest run without defeat in a top-flight season since February 2008.

Midfielder Eriksen has had a frustrating time of it since swapping Tottenham for Inter, but there is no doubting his quality.

He certainly took no time to settle in after coming on with the champions-elect striving for an elusive opening goal, lashing home with the aid of a deflection.

Wait goes on for Lukaku and Martinez

Strike duo Lukaku and Martinez have both now gone five games without a goal, but it surely will not be long before they are back on the scoresheet.

Lukaku was denied due to an offside against Ivan Perisic after he had found the back of the net, with both frontmen having struck the woodwork.

- Inter have gained 82 points this season, equalling their tally in the entire 2019-20 season.
- Inter have hit the woodwork 18 times in Serie A this season, fewer only than Milan and Verona (20 each).
- Lukaku is the first player to score 20+ goals and deliver 10+ assists in a single Serie A season since Opta started to collecting this data in 2004-05.
- Lukaku is the first foreign player to have delivered 10 or more assists for Inter in a single Serie A campaign since Maicon (11 in 2009-10).
- Eriksen has scored two of his three Serie A goals against promoted sides (also against Brescia last July).
- Hakimi has been involved in 13 goals in Serie A this season (seven goals, six assists), fewer only than Robin Gosens among defenders in the top five European Leagues.

Inter could already have the title in the bag when they entertain Sampdoria next Saturday, while Crotone travel to the Eternal City to face Roma the following day.