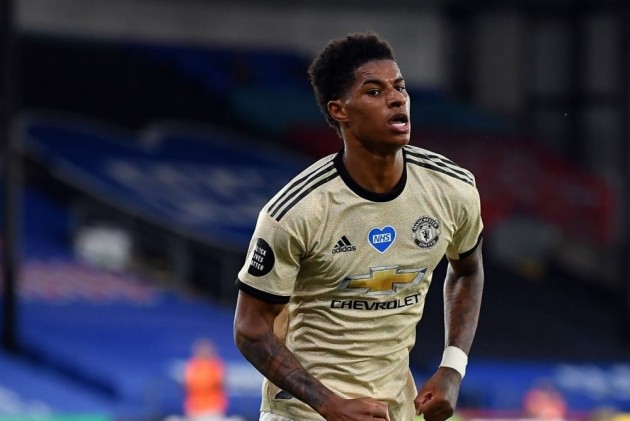 After a draw with Southampton ended their four-match streak of Premier League victories, Ole Gunnar Solskjaer's side returned to winning ways to keep the pressure on fourth-placed Leicester City, who had beaten Sheffield United earlier on Thursday.

Their victory came in somewhat unconvincing fashion, however, with Rashford providing a moment of quality to open the scoring in first-half stoppage time.

Palace fell foul of some contentious VAR decisions either side of the opener yet United had the final say -  despite a glaring miss from Bruno Fernandes - when Rashford turned provider for Martial to wrap up the points and leave the Champions League race perfectly poised with two matches remaining.

Victor Lindelof dived in on Wilfried Zaha just before half-time, yet Palace's penalty appeals fell on deaf ears, and their frustration was compounded three minutes later – Rashford finishing in style after getting the better of Van Aanholt.

Jordan Ayew thought he had restored parity 10 minutes after the restart, only for VAR to deem the striker was offside as Zaha released his cross.

Fernandes struck the post with half of the goal to aim at with 16 minutes remaining, but he soon atoned for that, combining brilliantly with Rashford to set up Martial, who tucked in his 10th top-flight goal since the turn of the year.

In the process of scoring, Martial collided with Van Aanholt, who had to receive lengthy treatment and oxygen before being taken off as a difficult day for Palace ended on a worrying note.

What does it mean? Champions League race set to run to the wire

United and Leicester go head-to-head on the final day of the season and it looks set to be a straight shoot-out for a spot in the Champions League, though third-placed Chelsea are still very much in the mix.

17 - Marcus Rashford has scored 17 goals in 29 league games this season, as many goals as he managed in the previous two campaigns combined (68 apps). Rewards. pic.twitter.com/546USrTRt4

United forward Rashford has enjoyed a fine week, having been awarded an honorary doctorate by the University of Manchester for his work in the community, and his effort took him onto 17 league goals for the season – the same as in his two previous campaigns combined.

Lindelof seemed to make contact with Zaha in the box when the Palace forward powered through shortly before half-time, yet VAR did not instruct referee Graham Scott to reassess his decision, despite the replays showing there was indeed a touch from the United defender.

Palace were dealt a blow by the technology again in the second half, when Ayew's goal was disallowed.

- Manchester United have gone unbeaten in their last 19 games in all competitions (W14 D5) – their longest such run since a 29-game streak ending in November 2010 under Alex Ferguson.
- Roy Hodgson has lost six consecutive Premier League games for the first time since losing his last three with Blackburn in November 1998 and his first three with Fulham in January 2008.
- Seven goals that were originally awarded against Man Utd have been overturned by VAR this season, the joint-most of any side in the Premier League this campaign (alongside Southampton and Brighton).
- Man Utd's Marcus Rashford has scored 17 goals in 29 league games this season, as many goals as he managed in the previous two campaigns combined (68 apps).
- Anthony Martial and Rashford have now assisted one another a combined seven times in this season's Premier League, the most of any pairing in a single season for Man Utd in the competition.

United turn their focus to the FA Cup on Sunday, with Chelsea their semi-final opponents on Sunday. Palace, meanwhile, face Wolves in their penultimate league outing.