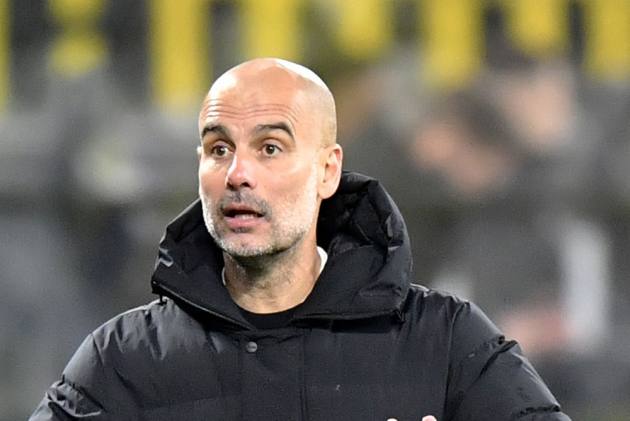 On April 14, Manchester City progressed to the Champions League semi-finals for the first time under Guardiola's management.

Fourteen days later, on Wednesday, they won a Champions League semi-final match for the first time in their history, coming from behind to beat Paris Saint-Germain 2-1 at the Parc des Princes.

In the interim period, City lost an FA Cup semi-final to Chelsea, briefly tried to join a European Super League and got their Premier League title charge back on track at Villa Park before returning to Wembley to retain the Carabao Cup.

Now, in their sixth consecutive game away from the Etihad Stadium, victory at Crystal Palace on Saturday can take them to the brink of a third Premier League title in four seasons – an achievement that would be confirmed if City win and, on Sunday, reigning champions Liverpool beat Manchester United at Old Trafford.

"These two weeks were so difficult, strange for me even," Guardiola said.

"I don't even know which competition we're playing for! These two weeks were a little bit weird."

If results go their way, City could this week be celebrating regaining supremacy in England and reaching their first European final for 51 years.

Such a scenario appeared unlikely when defeat at Tottenham in November left City languishing 11th in the Premier League, with 12 points from eight games.

Guardiola credited his assistants Rodolfo Borrell and Juanma Lillo for their part in the turnaround, because they are "colder… in the bad moments".

But the majority of the plaudits were reserved for a squad who have negotiated a relentless schedule – winning 35, drawing three and losing three of 41 outings since that reverse at the Tottenham Hotspur Stadium – with unblinking form throughout the second half of the season.

"I don't know what's going to happen in the four weeks ahead of us, but the season has been extraordinary already," he said.

"We have an incredible title ahead of us and we have 95 per cent of the chance to win it. It is incredibly close. And after we will try to do a good game to reach the [Champions League] final, but what can I say? How could I complain about what the players have done? It is impossible.

"It’s a tough year, the lockdown. The team has been more resilient and calm. When you play every three days, you don't have time to see things clearly, because it's [about] the next one.

"This is the most difficult thing when you play a lot of games, but the difference here is lockdown – our lives have changed completely – and it's a shorter period of time.

"That makes this season so special for everyone. Winning one title already, close to another and play another final on Tuesday. It has been exceptional."

By contrast, Guardiola was keen to give any plaudits for his own half-time tactical tweaks during the victory in Paris the short shrift – pointing to the stroke of fortune his team enjoyed when Riyad Mahrez's decisive free-kick snuck through PSG's disintegrating defensive wall.

"I am a genius today because Riyad Mahrez shot a ball that passed between two hips and scored a goal. I am a genius and that is the reason why," he proclaimed, with typically mocking sarcasm. "Situations are analysed on these stupid things.

"We are good and the manager is incredible – Oh! A tactical masterclass! The wall from the Paris players was correct as they jumped, but the ball came inside two hips and we analyse how good we are as a team.

"We could draw or lose doing absolutely the same, like in the past. Against Lyon [in last season's Champions League] we missed and everything was a disaster.

"That's why the consistency during 10 months and being there is the most important thing as a club.

"After that, in the final moments, if the opponent makes an incredible action and you can't stop it, what can you do?"

In the Premier League at least, those 10 months of toil leave the final moments very much in Guardiola's and City's hands.