Dani Carvajal has suffered a setback just three games into his return from a hamstring injury, with reports in Spain suggesting his season could be over 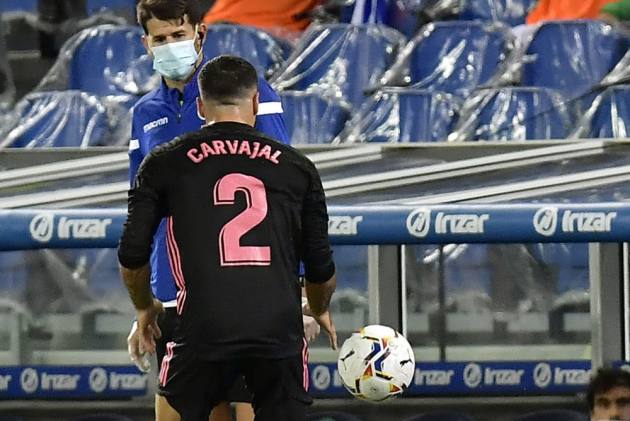 Dani Carvajal has suffered another injury setback just three games into his comeback, with the Real Madrid defender reportedly set to miss the rest of the season. (More Football News)

Carvajal was out for two months earlier this year due to a hamstring issue but had returned to action on April 21, coming on as a second-half substitute in a 3-0 win at Cadiz.

The Spain international played 68 minutes in the 0-0 draw with Real Betis last weekend, while he was on the field for 77 minutes in Tuesday’s Champions League semi-final first leg against Chelsea.

However, Madrid have announced he sustained an injury to a muscle in his right hamstring, though did not issue a timeframe for his potential return.

"Following the tests carried out today on our player Dani Carvajal by the Real Madrid medical department, he has been diagnosed with an injury to the semimembranosus muscle in his right leg. His recovery will be monitored," a short statement from the club read.

Several Spanish media outlets have suggested Carvajal will miss Madrid's crucial LaLiga run-in as they aim to defend their title.

Zinedine Zidane's squad have five games remaining in the domestic campaign, as well as the return fixture against Chelsea to come at Stamford Bridge next week.

If they manage to progress at the expense of the Blues in the Champions League, the 2021 final takes place in Istanbul on May 29.

Carvajal has made 15 appearances in all competitions in the 2020-21 season; Lucas Vazquez had previously filled in for his compatriot in defence but a knee ligament injury ended his season early.

However, there was some positive news on the injury front for Zidane on Thursday as Sergio Ramos returned to training.

The centre-back has not featured for Madrid since the 3-1 Champions League win over Atalanta in the second leg of the last-16 tie on March 16.

Ramos did make three appearances for Spain after that fixture, returning to his club with a calf injury. He also tested positive for coronavirus this month, but Los Blancos' posted footage on social media of the 35-year-old working with his team-mates ahead of this weekend's game against Osasuna.