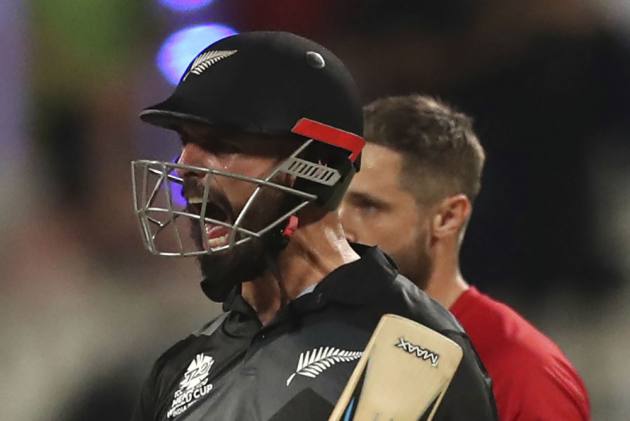 New Zealand opener Daryl Mitchell said he "couldn't remember" what was happening in the field of play as he went about scripting his team's sensational win over England in the first semifinal of the T20 World Cup in Abu Dhabi, UAE on Wednesday.

Player of the Match Mitchell blazed his away to an unbeaten 47-ball 72 to play a pivotal role in the five-wicket victory that seemed unlikely before a flurry of sixes from James Neesham and the opener himself brought the equation down to 20 in the last two overs.

Mitchell, though, finished the job with an over to spare with two sixes and a four in the penultimate over.

"It was a bit of a whirl at the end there. I couldn't remember what was going on, but I'm happy I got the job done," Mitchell said at the presentation ceremony.

"It was a challenging surface, with the new ball, and it was two-paced. The way (Devon) Conway set the platform and Neesh hit a few out of the ground was amazing. We knew one or two good overs would do it, and we got the momentum back thanks to Neesham's hitting.

Mitchell also revealed that his father travelled to watch him play.

In the game, Conway made an invaluable 46, and alongside Mitchell, played a part in keeping the Kiwis in the game.

Like Mitchell, Williamson too credited Neesham for changing the momentum of the game with his three sixes.

"We've played each other on a number of occasions, knew it would be a great game of cricket, and really chuffed with the heart that was shown throughout that performance," Williamson said.

"Outstanding from Mitchell at the top, but cashing in on the match-ups (was crucial). His character stood out today, an incredible knock, not done it a lot at the top of the order.

"T20 cricket is a game of small margins, depending on the surface, short side... can all be match-defining. We had wickets in hand which was really important.

"Neesham came out and hit the ball hard, and changed the momentum of the game. Ultimately the deciding factor," the skipper added.

England skipper Eoin Morgan had no qualms in admitting that his team was outplayed by the Kiwis.

"Full credit to Kane and his team, they outplayed us today, I can't fault anything that we've done tonight, we've fought hard and represented ourselves well, but come up short tonight," Morgan said.

"Incredibly proud of the guys. Hard to identify the key moments, they built up until they had to push the button, then came good. He held them at bay up to that point. It was a sluggish pitch and we struggled to hit sixes, a good indication it was two-paced.

"We posted a par score and felt in the game at the halfway side. To have the ability to hit sixes from ball one like (Neesham), full credit to him. I hope to be back, I am still offering enough, and I love playing in this changing room. Incredibly proud to be their leader," Morgan said.