David Moyes' wild celebrations on Sunday may not prove as memorable as Jose Mourinho's knee slide, but the West Ham boss enjoyed the moment 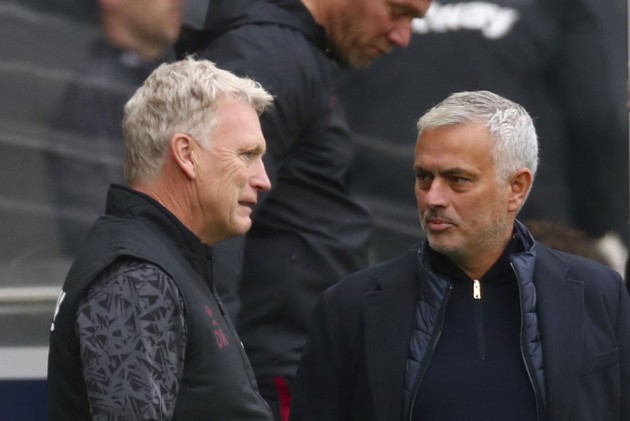 David Moyes joked he was not going to "slide down the touchline" in the manner of rival boss Jose Mourinho after his West Ham team came back to draw 3-3 with Tottenham. (More Football News)

An ecstatic Moyes ran onto the pitch at Tottenham Hotspur Stadium on Sunday after Manuel Lanzini's stunning strike four minutes into stoppage time capped a comeback for the ages.

West Ham trailed 3-0 in the 81st minute, yet Fabian Balbuena's header and an own goal from Davinson Sanchez set the stage for Lanzini to rescue a point.

It made West Ham the first team in Premier League history to have avoided defeat when 3-0 down with nine minutes of normal time remaining.

Mourinho has famously sprinted along the touchline to celebrate key moments in his managerial career, while he also performed a knee slide when his Real Madrid team beat Manchester City in the Champions League group stages thanks to a late Cristiano Ronaldo winner.

While Moyes' celebrations will no doubt prove slightly less memorable, the Scot joked he did not wish to repeat what had already been done.

"I wasn't going to slide down the touchline on my knees," Moyes said, chuckling, in an interview with Sky Sports. "Because that's been done before."

3 - West Ham are the first team in Premier League history to avoid defeat in a game having been 0-3 down as late as the 81st minute. Comeback. #TOTWHUpic.twitter.com/bvsiVTV8X8

West Ham were 3-0 down by the 16th minute on Sunday, with Son Heung-min and Harry Kane putting Spurs in complete control.

Yet Moyes insisted there was no need for West Ham to change their tactics, as he believed they had put in a strong performance which was not reflected by the scoreline.

"The half-time team talk was actually difficult, because we were 3-0 down but I thought we'd played really well, except for the opening five or 10 minutes," he said.

"The toughest decision was not to make any decision, because it's always quite easy for a manager to feel like that you have to make choices and change things.

"I didn't think we had to. I thought we were playing well enough. We'd given away three goals, which I couldn't believe actually. These things happen, that's the way football has been a little bit at the moment.

"As a manager, it's very difficult to use the word "proud" very often, but I've got to say tonight is a proud moment to be manager of the team, because of how well we played, how well they kept at it. They never gave in.

"From 3-0 down against Tottenham, it's a big result. A local derby as well, so hopefully the supporters will enjoy it."