David Silva has helped to revitalize Real Sociedad's attack, which has scored 14 goals in its last four league matches. 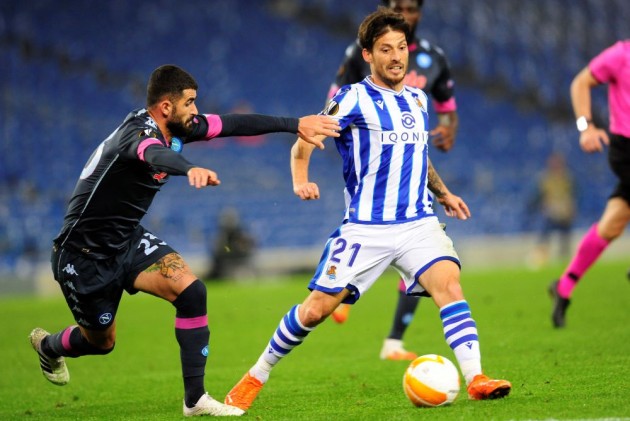 With a goal against his former team, David Silva ended his scoreless streak in his return to the Spanish league.
Silva opened the scoring with a header on Sunday as Real Sociedad beat Celta Vigo 4-1 to take a one-point lead at the top of the league.

Willian José had a brace and Mikel Oyarzabal also scored for Sociedad as the Basque Country team won its fourth straight league match. It has 17 points — one more than Real Madrid, which has a game in hand.

Iago Aspas netted the only goal for Celta, which saw its winless streak reach six matches.

The 34-year-old Silva rejoined Sociedad this season after a highly successful decade with Manchester City.

“Good three points and a great match by the team,” said Silva, who played for Celta in the 2005-06 season.

“Good luck to Celta the rest of the season. It was sad to see the Balaídos (Stadium) without its fans.”

Silva has helped to revitalize Sociedad's attack, which has scored 14 goals in its last four league matches. The team is coming off a home loss to Napoli in the Europa League, however, and has a home match against Group F leader AZ Alkmaar on Thursday.

“There is no time to celebrate,” Sociedad forward Cristian “Portu” Portugués said.

“Our next match is very important and we will need to give our best to win the three points.”

Celta, which remains near the bottom with six points from eight matches, has conceded 12 goals and scored only two in its last five matches.

“It's tough to compete like this in the first division,” Aspas said. “We are in a difficult situation but there is a lot of season left.”

Madrid is in second place after beating Huesca 4-1 at home on Saturday. Atlético Madrid is third after winning 3-1 at Osasuna. Atlético trails Madrid by two points but has a game in hand.

Barcelona is only 12th after drawing 1-1 at Alavés.

Valencia took the lead through Yunus Musah in the 22nd, but the visitors rallied with goals by Cucho Hernández in the 87th and Ángel Rodríguez four minutes into injury time at the Mestalla Stadium.

Valencia's Thierry Correia was sent off in the 56th and Getafe's Damián Suárez was ejected eight minutes into stoppage time.

GRANADA HOLDS ON
Fifth-place Granada drew 1-1 with Levante at home despite playing with 10 men from the 16th minute because of Maxime Gonalons' red card for a hard tackle.
Darwin Machís had put the hosts ahead in the eighth minute after an assist by Gonalons. Rúben Vezo equalized for 18th-place Levante in the 34th.