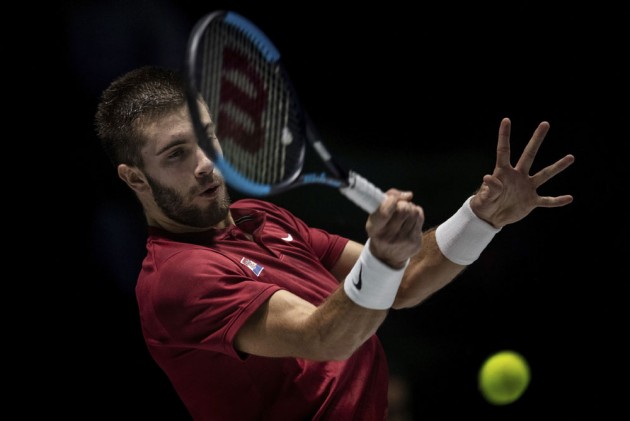 Croatia's hopes of defending their Davis Cup title took a huge early blow as they were beaten 3-0 by Russia in Madrid on Monday. (More Tennis News)

Champions a year ago, Croatia's chances of even progressing from the first stage in the 2019 Finals already look remote – with Rafael Nadal's Spain still to play in Group B.

Croatia took on Russia on centre court following the opening ceremony in a match-up that was hindered by key withdrawals ahead of the tournament.

Marin Cilic, who led Croatia to victory in 2018, missed out with injury, while Russia's Daniil Medvedev ducked out citing fatigue.

Russia dealt with the absence of their number one in far more convincing fashion than Croatia, though, with Borna Gojo comfortably eased out 6-3 6-3 by Andrey Rublev in the first of three contests.

The two remaining star names did battle next, but Russia again came out on top as Karen Khachanov rallied past Borna Coric 6-7 (4-7) 6-4 6-4.

And then Rublev and Khachanov teamed up for a straight-sets doubles success against Ivan Dodig and Nikola Mektic.

Elsewhere, there was an upset as Italy went down to Canada 2-1, with both Fabio Fognini and Matteo Berrettini beaten in singles play.

Vasek Pospisil, ranked 150th in the world, defeated Khachanov at the US Open and claimed another scalp against Fognini, before Berrettini was turned over by Denis Shapovalov.

Italy sent in their two stars for the doubles, where they gained a measure of revenge over Pospisil and Shapovalov, winning in three.

Belgium survived David Goffin's awful start to his rubber to win 2-1 against Colombia.

Steve Darcis had earlier seen off Santiago Giraldo in straight sets, but Goffin fell four games behind in the opener against Daniel Elahi Galan before staging a fightback.

He won 3-6 6-3 6-3, although Colombia got on the board with a doubles comeback from Juan-Sebastian Cabal and Robert Farah.