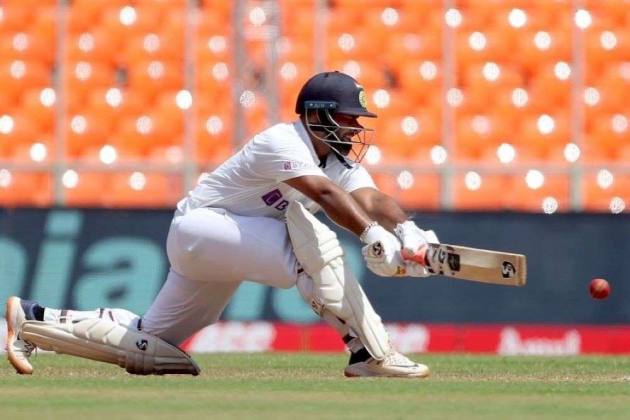 Rishabh Pant conjured a dashing century to drag India away from danger and into a position from where they can push for victory over England in the fourth Test.

The 23-year-old reached his century, his third for India and a first on home soil, with a slog-swept six off Joe Root. That was the 115th ball that Pant faced but he perished to the 118th, miscuing a pull James Anderson to Root at midwicket.

And angry though he was to toss away his wicket in such a fashion, day two of this final match in the series was emphatically Pant's day, India establishing a first-innings cushion of 89 so far as they attempt to build on their 2-1 lead.

Rishabh Pant brings up his hundred with a SIX

From 24-1 overnight, India were dealt two major blows midway through the morning session when Cheteshwar Pujara was snared lbw by Jack Leach, soon followed back by captain Virat Kohli, caught behind off Ben Stokes without scoring. England snatched another big wicket immediately before lunch, Stokes taking the slip catch off Anderson to remove Ajinkya Rahane.

Losing Rohit Sharma for 49 was another significant blow to prospects of going significantly beyond England's 205, Stokes trapping him with a delivery that nipped back sharply off the pitch and struck the batsman above the back pad.

When Ravichandran Ashwin fell for 13 to Leach, England had a first-innings lead in their sights, but those hopes soon faded. Stokes threatened another breakthrough, but Pant's derring-do chop outside off stump cleared second slip, racing away to the boundary to take India past the 200 mark.

Pant pulled Stokes to the boundary to bring the teams level, and when the England all-rounder dropped the ball on his run-up in the same over, it summed up his frustration when he booted it away.

With wind in his sails, Pant audaciously took on the new ball as Anderson entered the attack, giddily clubbing the first two deliveries to the boundary, and in Anderson's next over he reverse-swept the paceman over England's slip cordon and to the ropes. Washington Sundar (60 not out) provided capable company in a partnership worth 113.

Pant was upset with himself for getting out so soon after reaching three figures, giving Anderson a third wicket, but by that stage the young batsman owed nobody an apology.

India turn up the heat

As the temperature climbed above 40 degrees Celsius, England wilted. Which is not to say the effort levels went down, because Stokes most notably was charging in with familiar elan, but India were at ease in the scorching conditions, and the more escapes that the hosts enjoyed, the more the heat took its effect on those in the field.

Misfortune combined with searing heat is a fatiguing combination, while Dom Bess' struggles meant England lacked a reliable off-spinning option. Throw Pant's brilliance into the equation and it proved a wearing late afternoon for the tourists.

Or almost pristine, anyway. He lived dangerously at times, offering glimpses of chances to England, but this was quite a coming-of-age moment for Pant as he celebrated a first Test century in India. The likelihood is that plenty more will come from the wicketkeeper-batsman, who struck 13 fours and a pair of sixes in his knock, changing the complexion of this contest blow by blow.