Deepak Punia defeated Colombia's Carlos Izquierdo 7-6 in the 86 kg weight category to enter the semi-finals of the 2019 World Wrestling Championships. 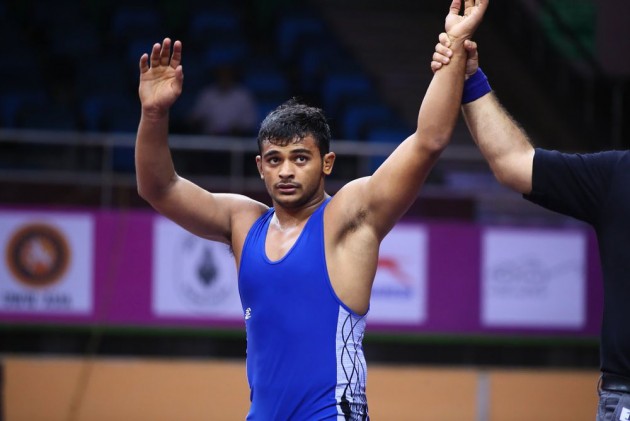 Deepak Punia on Saturday secured an Olympic berth as he entered the semi-finals of World Wrestling Championships.

Deepak defeated Colombia's Carlos Izquierdo 7-6 in the 86 kg weight category to enter the semi-finals of the tournament.

With Deepak's win, India now has four Olympic quotas from the championship.

"#TOPSAthlete #DeepakPunia wins an #OlympicQuota in men's 86 kg after reaching the semifinals at World #Wrestling C'ships. He beat Colombia's Carlos Izquierdo 7-6 after trailing 3-6. India has won 4 Oly. quotas from this C'ship compared to 1 in 2015. @RijijuOffice @DGSAI," SAI Media tweeted.

Kumar had defeated Reza Atrinagharchi of Iran 6-3 to clinch the medal in the 57 kg weight category.

Bajrang Punia also won a bronze medal on Friday in the championship, defeating Tulga Tumur Ochir of Mongolia 8-7 in the 65 kg weight category.

Punia had secured a spot for the Tokyo 2020 Olympics on Thursday after an impressive 8-1 win over North Korea's Jong Son in the tournament.

On Wednesday, Vinesh Phogat became the first Indian wrestler to qualify for the Olympics and she would be competing in the 53 kg category. She had bagged gold medals in the 2014 and 2018 Commonwealth Games.

In the 2018 Asian Games, she had clinched a gold medal in the 50 kg category.