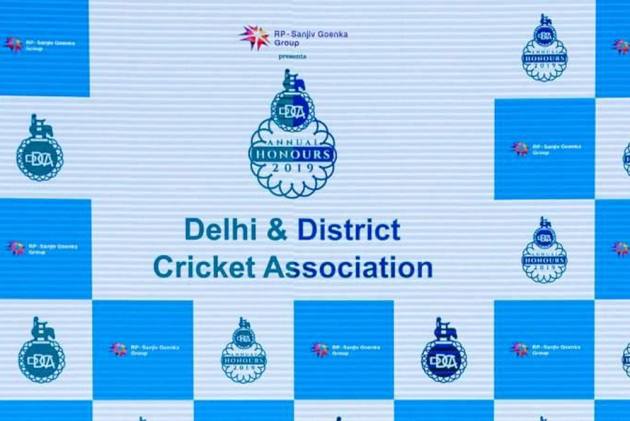 Between July 2018 and November 2019, the Delhi and District Cricket Association (DDCA) received at least Rs.40.75 crore from the Board of Control for Cricket in India (BCCI) – some of it is its share of the BCCI’s income and some for expenditure/reimbursement. But despite having enough money in its kitty over the years, the DDCA, for some unexplained reason, has not paid almost Rs.7 crore due to its affiliated clubs dating back to seven years. The dues include clubs’ annual subsidy and prize money of the League, Super League, and Hot Weather Tournament winning teams (see graph below). (More Cricket News) 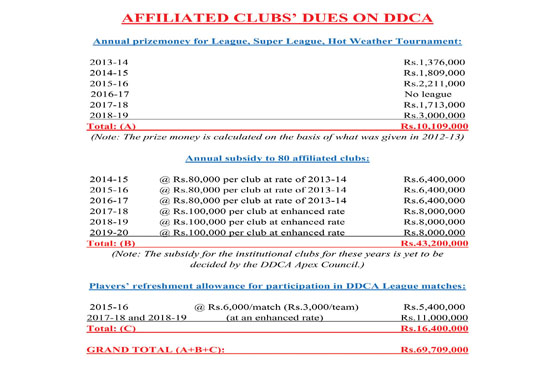 The 111 clubs – 80 are affiliated teams and the rest are institutional clubs – form the backbone of Delhi cricket. But it is also a hard fact that they are the most supressed and ignored lot when it comes to distributing small things like refreshment for players who represent these clubs in the DDCA leagues. Interestingly, since 2013-14 successive DDCA dispensations have ignored the clubs’ pleas to pay their rightful dues. In one word this could be attributed to ‘politics’ within the DDCA. And this politics reached its nadir in 2017-18 when the DDCA league did not take place at all, thus killing the opportunity for the players to perform and break into Delhi, and finally the Indian, team. Who knows, some budding careers might have ended out of frustration that season.

Unfortunately for these clubs, the present DDCA dispensation is no better that its predecessors. There is no elected president at the moment after Rajat Sharma’s controversial stint ended in bizarre circumstances, its secretary is reportedly in jail, and the treasurer is a public servant (sitting Delhi MLA), much against the Supreme Court-approved Lodha Committee recommendations.

Amid these testing times – not just due to Corona virus -- various officials and coaches who have been involved with the Delhi’s club cricket for ages calculated the dues and found that at least Rs.6.97 crore is due to the clubs under various heads, starting from the 2013-14 season. This amount broadly includes clubs’ annual subsidy, prize money of the winning teams of the DDCA League, Super League, and the Hot Weather Tournaments, and refreshment allowance of the players.

Dronacharya Awardee coach Tarak Sinha, who runs the leading Sonnet Club, is frustrated at the turn of events. “I have forgotten when we received our dues the last time. I have learnt to live without the subsidy. My club is running without it; we don’t get any help from the DDCA, but we are managing somehow because we love cricket. Our effort has always been to provide players to the Delhi teams; we never desired what the state [DDCA] would give us,” a peeved Sinha, who has produced the likes of Manoj Prabhakar, Atul Wassan, KP Bhaskar, and Ajay Sharma, told Outlook.

On the one hand, the DDCA officials have deflected the clubs’ repeated requests on some pretext or the other, and on the other hand, the association has awarded a Rs 6.25 crore contract to upgrade its restaurant at the Ferozshah Kotla Grounds, its controversial bar, and a lounge for its members. The DDCA is also never short of money when it comes to paying its “favourite lawyers” handsome amounts and its Ombudsman. According to one estimate, the DDCA paid Rs.1.63 crore to them in the last four months this year.

Before Rajat Sharma and his team won a landslide DDCA election in June 2018, the Delhi High Court had appointed two successive retired judges – Mukul Mudgal and Vikramajit Sen – to administer the association when association was completely crippled. During their periods of administration, the DDCA didn’t receive its share of the revenue from the BCCI, except for the unavoidable expenses like staff salary etc.

But since a proper body, led by Rajat Sharma, was sworn in on July 2, 2018, the DDCA has been receiving funds regularly from the BCCI. As per the BCCI’s list of payments of Rs.25 lakh or more to various parties, the DDCA received Rs.40.75 crore between July 2018 and November 2019. There is a possibility the DDCA received more than this amount, as the payments of than Rs.25 lakh are not shown on the BCCI website. This amount (Rs.40.75 crore) also included -- as displayed on the BCCI website -- expenses towards the conduct of the DDCA League matches. Where has that money meant for clubs gone?

When the Vinod Ra-led Committee of Administrators (CoA) administered the BCCI, it had received several representations from the various Delhi clubs. They had complained that “a majority of the DDCA members who have voting rights are social members whereas the affiliated/institutional clubs, which are actually involved in conducting cricketing activities within the jurisdiction of the DDCA, do not have any voting rights”. That was last year.

The CoA then asked “how the DDCA has divorced/separated the membership of any social club that is part of the DDCA from the administration of cricket”. In its reply, the DDCA had said that if clubs were to be made members, no money in the form of the grant could be given to them, and if that was to be done, “the DDCA may risk losing its license under the Companies Act 2013”. The DDCA further wrote: “In view of the foregoing, it is requested that existing membership structure of the DDCA may be allowed to be continued as it is.” So, the clubs have not been made DDCA members.

TV Subramaniam, secretary of the Pelicans Crickey Club who has been involved in local cricket for about 40 years, is among those who have been knocking at the doors of successive DDCA dispensations to get their rightful dues. “Clubs are the main stakeholders of cricket promotion at the grassroots level in Delhi. But their interests are not taken care of by the DDCA,” he says.

In a recent letter addressed to DDCA secretary Vinod Tihara, Subramaniam again raised the plight of the clubs. He also cites the examples of Mumbai and Bengal associations that have clubs as their members. “The then CoA-BCCI vide their directions dated 13th August, 2019, had requested all state cricket associations advocating an inclusionary approach towards granting of membership to their affiliated clubs. It may be mentioned that in Associations like Andhra Pradesh, Himachal Pradesh, Tripura, Vidharbha, Baroda, Hyderabad, Bengal, Orissa, Maharashtra, Jharkhand, and Mumbai provision exists for membership/voting rights to affiliated/institutional clubs,” he had pointed out in his letter.

Gurcharan Singh, a Dronacharya Awardee coach and working president of Delhi Blues and National Stadium Cricket Centre, is also frustrated. “For years and years, we have gone without this money [dues of clubs]. There seems to be no end to this delay. Perhaps there is no solution to this imbroglio,” says a frustrated 86-year-old coach.

“The DDCA should pay our dues which are pending for several years. They passed a rule to provide refreshment for players in the league. But we are still managing the refreshment ourselves [the money is supposed to be reimbursed at the end of a season]. How will players play without eating anything during lunch interval? We are passing through very bad times. But there are expectations, and that’s why we all are carrying on,” says Sinha.

Other club officials, too, are equally disappointed. Sarvan Kumar, who produced pacer Ishant Sharma and runs Rohtak Road Gymkhana cricket club, says whenever DDCA officials are approached for dues they pass the buck to their colleagues to avoid facing the clubs. “They have the money to spend on legal issues and lawyers, but not to the clubs. Actually, their intention is bad; they just don’t want to pay the clubs,” he says.

Umesh Sharma of Kishanganj Gymkhana and Abdul Sattar of Maulana Azad Cricket Club concur with Sarvan. “Whoever comes to power in the DDCA ignores the clubs. We spend from our pocket because we can’t stop cricket,” rues Gupta. Says Sattar: “The DDCA executive committee has no interest in cricket. They have no dearth of money to pay to lawyers and hefty salaries to the association’s inflated staff, but not to the clubs. Ironically, they are trying to finish off clubs, which are the backbone of Delhi cricket.”