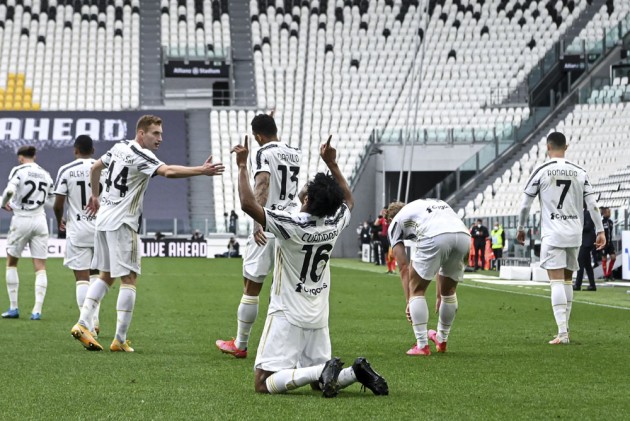 Juventus kept alive their Champions League qualification hopes with a dramatic 3-2 win over Serie A champions Inter in the Derby d'Italia on Saturday.  (More Football News)

Cristiano Ronaldo tapped home after his initial penalty was saved to put Juve ahead midway through the first half, but Romelu Lukaku drew Antonio Conte's side level soon after with a penalty of his own.

A Giorgio Chiellini own goal seven minutes from full-time cancelled out Juan Cuadrado's earlier strike, but the Colombia international sealed a vital three points for Juve – who had Rodrigo Bentancur dismissed early in the second half – in the 88th minute, powering home from the penalty spot after he had been brought down by Ivan Perisic, whose team-mate Marcelo Brozovic was sent off in stoppage time.

The result moved Andrea Pirlo's side into the top four, although they could be usurped ahead of next weekend's final matchday if Napoli overcome Fiorentina on Sunday.

Juve's early positive approach was rewarded in the 24th minute when a relieved Ronaldo slotted home the rebound after Samir Handanovic had kept out his initial penalty, which was given after Matteo Darmian had hauled down Chiellini at a corner.

Inter drew level 11 minutes later, though, Lukaku stroking home from the spot after Matthijs de Ligt was penalised for the slightest of touches on Lautaro Martinez.

Juve restored their lead in first-half stoppage time, Cuadrado's effort from outside the penalty area flashing past Handanovic courtesy of a deflection off Christian Eriksen.

Juve's task of holding onto their lead suffered a blow in the 55th minute when Bentancur received a second yellow card for a foul on Lukaku.

Pirlo opted to replace Ronaldo with Alvaro Morata for the final 20 minutes and that decision appeared to have backfired when Chiellini bundled into his own net under pressure from Lukaku, the goal eventually given after the referee was encouraged to review the incident by VAR.

However, the hosts sealed a memorable three points with two minutes remaining as Cuadrado lashed home from the spot to inflict a first defeat in 21 Serie A matches for Inter, who had Brozovic dismissed after he picked up a second yellow card for a foul on the two-goal hero.

What does it mean? Bianconeri stay in the top-four mix

Juve suffered a dismal 3-0 home defeat to rivals Milan last weekend, but wins over Sassuolo and now Inter have given them a chance of securing a top-four spot going into the final weekend, regardless of Napoli's result on Sunday.

They did it the hard way against Conte's men, though, and were indebted to a generous late penalty decision to claim a win that could go a long way to securing their place in a competition they tried so desperately to leave behind just a few weeks ago.

Cuadrado had only scored a solitary goal in Serie A this season going into this game, but a priceless double here could have salvaged something for his club from a dismal season. No player on the pitch had more shots on target (two) or made more key passes (two) than the Colombian.

Bentancur let off the hook

Bentancur will have breathed a huge sigh of relief when Cuadrado's penalty hit the back of the net. Two yellow cards before the hour mark almost cost his side a precious three points, but they live to fight another day.

- This is the first match between Juventus and Inter with three penalties taken in Serie A since Opta started collecting this data (since 2004-05).

- Juventus are unbeaten in each of their last five Serie A home games in which they have received a red card against Inter (W4 D1).

- The last time there were two red cards in a Juventus v Inter match was back in 1998 (Zinedine Zidane and Edgar Davids, both with Juventus).

- Cuadrado is the first Juventus player to score a brace against Inter in Serie A since Darko Kovacevic in April 2000.

- Cuadrado is the first Juventus defender to take part in 12 goals (two goals and 10 assists) in a single Serie A campaign since Opta started collecting this data (since 2004-05).

Both sides finalise their campaigns next Sunday, Juve travelling to Bologna and Inter host Udinese.