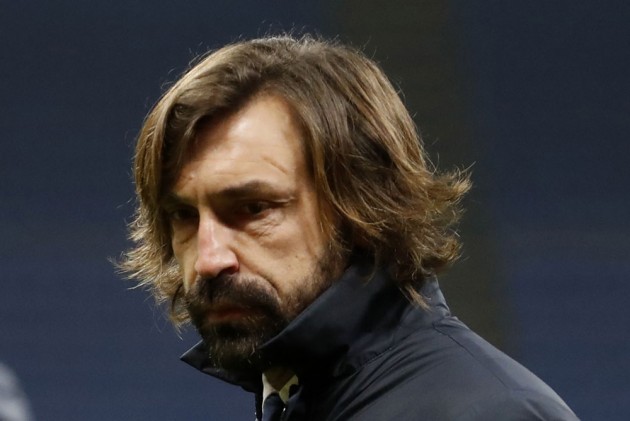 Andrea Pirlo says Antonio Conte is the person who inspired him to move into coaching and is fully aware of the mind games being used by the Inter boss ahead of Sunday's Derby d'Italia. (More Football News)

Midfield great Pirlo worked under Conte for Juventus and Italy during his illustrious playing career before retiring in 2017 and taking up his first managerial role with Juve last August.

Pirlo has made an inconsistent start to life in the Allianz Stadium dugout, but his side have won their last three league games to move to within four points of second-place Inter with a game in hand.

Despite being a further three points behind leaders Milan, Conte suggested ahead of Juve's trip to San Siro that the reigning champions remain the Scudetto favourites given they have won it nine years in a row.

The first of those title wins came with Conte in charge and Pirlo a regular in midfield, and the latter is not reading too much into the comments of his former head coach, who he still admires greatly.

"He likes to do this, I know him well," Pirlo said at Saturday's pre-match news conference. "He tries to take the pressure off his team and put it on us.

"We have no problems, we are Juventus, we have been winning for nine years and it is normal that we have more pressure.

"But they too have been built to win, and they are no less than us. It will be a great match between two teams that have the same ambition."

Pirlo previously described Conte as "the best coach he has ever worked with" and has opened up on the part the 51-year-old has played in his career.

He said: "Antonio was the first one who made me think about studying as a coach. I am grateful to him because he taught me so much as a player and from there I thought about a future as a manager.

"He is making a career of the highest level and has a great human depth but tomorrow we will be opponents. We have two different characters and maybe that's why we get along.

"There is still great esteem and great affection. He gave me a lot and made history at Juventus."

Juve are the only team against which Conte has always lost as manager in Serie A (three out of three), with the Bianconeri unbeaten in nine of their last 10 away league meetings in this fixture.

However, Inter have won five in a row on home soil in the league - the last time they won six on the spin was in December 2018 - and Pirlo is anticipating a tough match against an expensively-assembled side.

"Initially I expect an aggressive Inter who will want to give rhythm to the match," he said. "We have prepared ourselves for this must not be afraid, even in such an important match. It will be a tactical match but we must also be free of our heads.

"A victory can give us an important boost because it is Inter-Juventus. It is a game that goes beyond three points. It is not only important for the championship standings but for everything else.

"There is great attention and great concentration because we compete against a great team with great champions. They have strengthened during the summer, while we have made a journey towards the future.

"They have put players in the team for the present. We are two teams that will fight until the end for the victory of the championship."

Matthijs de Ligt, Alex Sandro and Juan Cuadrado will play no part after recently testing positive for coronavirus but Aaron Ramsey, Giorgio Chiellini and Weston McKennie are all in contention to start.

Juve have yet to lose a league game in which De Ligt has not started this term, drawing four and winning three, and Pirlo is happy with the options available to him at the back.

"De Ligt is important but let's remember that we also have other champions behind us," he said. "We will field players of great depth who have been at this level for many years.

"This is certainly an absence that we would have done less willingly but we feel even stronger with the return of Chiellini and with [Leonardo] Bonucci."