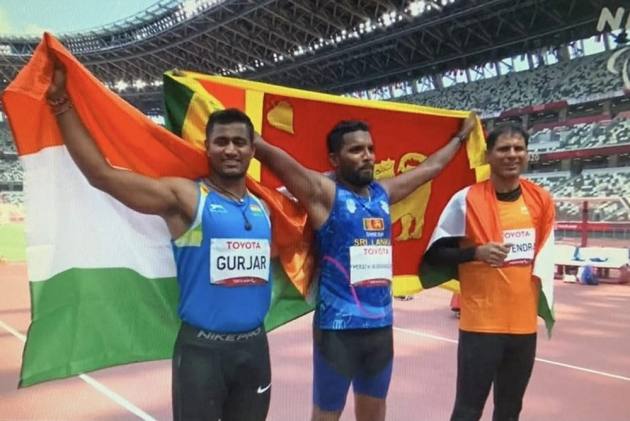 A blockbuster Monday witnessed India winning four medals at the Tokyo Olympics 2020, with the latest -- a silver and bronze -- coming from javelin throwers. (More Sports News)

Devendra Jhajharia, who was chasing an unprecedented third gold medal, settled for silver as India finished 2-3 in the men's javelin throw F46 class.

Third Indian in the nine-man field, Ajeet Singh finished eighth with a best throw of 56.15.

Sri Lanka's Dinesh Priyantha Herath Mudiyanselage won the gold with a world record throw of 67.79 in his third attempt.

The F46 classification is for athletes with arm deficiency, impaired muscle power or impaired passive range of movement in arms, with athletes competing in a standing position.

Jhajahria is already India's greatest Paralympian after winning gold medals in the 2004 and 2016 Games. The 40-year-old lost his left hand after accidentally touching an electric wire while climbing a tree at the age of eight.

Gurjar, 25, lost his left hand in 2015 after a metal sheet fell on him at his friend's house. The Jaipur-based Gurjar had won gold in the 2017 and 2019 World Para Athletics Championships. He had also won a silver in the 2018 Jakarta Para Asian Games.