Diego Maradona Dies: A Myth Is Leaving Us – Simeone

Diego Simeone mourned the death of legendary figure Diego Maradona, whom he played alongside for Sevilla and Argentina 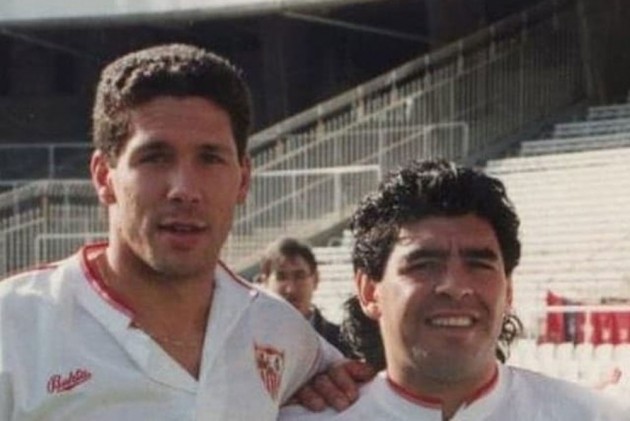 Diego Simeone found it difficult to accept the news of Diego Maradona's passing as he reflected on a difficult night for his Atletico Madrid side. (Mpre Footall News)

Maradona passed away at the age of 60 on Wednesday, his lawyer confirming he died of natural causes.

Shortly after news of Maradona's death, Atleti kicked-off against Lokomotiv Moscow in the Champions League, with the Group A clash ending 0-0.

Simeone was in the Argentina squad with the Napoli legend at the 1994 World Cup, having also been a team-mate of the mercurial midfielder at Sevilla in 1992-93.

"It's hard. When they call you on the phone and tell you that Diego passed away, you think, 'Diego cannot die'," Simeone told a news conference.

"A myth is leaving us, an Argentine who transmitted all his rebellion to fight with his positive and negative things, but always going forward. The way to get excited about playing soccer was by looking at him.

"He welcomed me in a spectacular way in Seville, I was young. The moment they tell you about this situation [Maradona dying] you say, 'It can't be, he can always come out.'

"This time he could not, but he will always be with us, especially with the Argentines, he is a myth and it gives us a lot of sadness and emptiness – it cannot be. A very strong hug for his closest family and a lot of pain."

While Simeone mourned the death of his former team-mate and one of Argentina's most famous players, he also had to contend with a frustrating display from his Atleti team.

20 - @atletienglish have made 20 shots, six on target vs Lokomotiv, more than any other side in a #UCL game without scoring this season. Riddle #AtleticoMadrid#AtletiLokomotiv #UCL pic.twitter.com/IBx6jPc7tn

Atleti registered 20 attempts against Lokomotiv yet could not find the net – it is the most shots a team has amassed in a Champions League match this season without scoring.

The draw leaves Atleti, whose captain Koke had a goal disallowed by VAR on his club-record 100th European appearance, second on five points from four games, and they still have work to do if they are to qualify for the last 16.

"We are concerned with the Champions League, of course, we know that it has started with difficulties," Simeone added.

"These last two games we generated many chances to win them. The goal came, unfortunately it was offside."