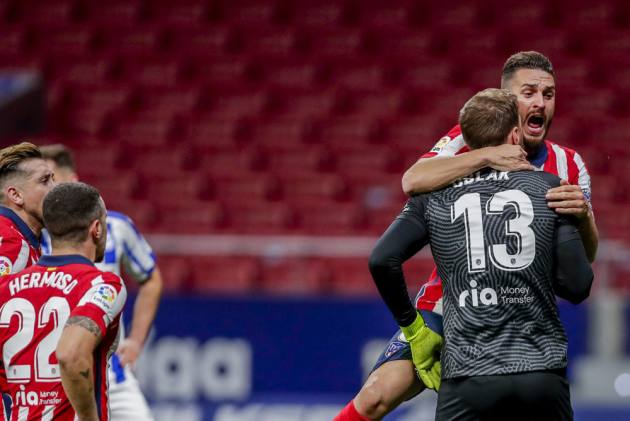 Suarez opened the scoring just after half-time with a glancing header, the Uruguayan converting for the 500th time in his professional career.

For a moment it looked as though his goal would not be enough to secure victory, as Stefan Savic was penalised late on for catching Luis Rioja with a flailing elbow in the penalty area.

However, Oblak threw himself to his right to turn Joselu's spot-kick away and Atletico held on for an unconvincing triumph.

Simeone saluted the decisiveness of his two main men on the day and insisted the team's attitude has been exemplary in the wake of Champions League disappointment at the hands of Chelsea in midweek.

500 - Luis Suárez  has scored his 500th goal in his profesional career:

"It usually happens a lot in big teams, having decisive players who give the team's overall work a boost."

He added: "Beyond the elimination in the Champions League the other day, the group's work has been extraordinary. There is always an intention, an availability, a commitment.

"In the first half we had control of the ball but we weren't incisive, we didn't create goal situations to break the deadlock. They closed us off very well.

"Each time the competition progresses, the matches will be tougher, more difficult, we are seeing it in all stadiums. The differences are minimal.

"In the second half we put into practice what we talked about. We accelerated, we had more people in the area to finish, and a great goal came.

"From then on it was the best moment of the game, until the 77th minute when we had three important occasions.

"The penalty – you try to stop it. I'm very happy for Jan. It [the penalty save] generates three very important points for the team."

1 - Jan Oblak  has saved his first penalty shot after ten faced at home in all competitions (eight goals + one missed), the second one after saved vs Hakan ÇalhanoÄÂlu in #UCL 2015 Shoot-Out penalties vs Leverkusen. Decisive #AtletiAlaves pic.twitter.com/otT7pnKZla