Atletico Madrid suffered a costly 1-0 loss to Sevilla, which saw their lead atop La Liga table cut to three points, though Barcelona could close to within a solitary point 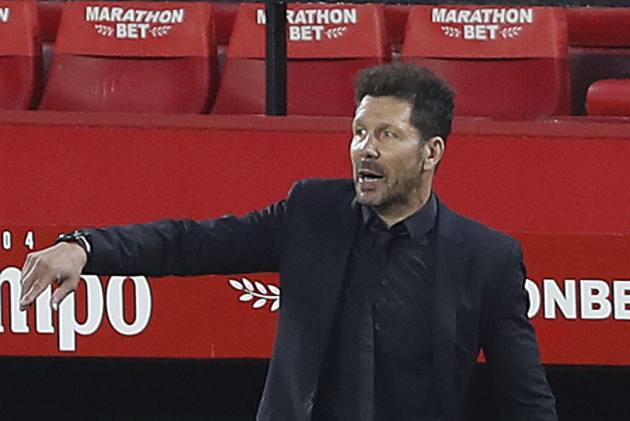 Diego Simeone said Atletico Madrid do not feel nervous after the LaLiga leaders slipped up, though he did question his team's intensity. (More Football News)

Atletico suffered a costly 1-0 loss to Sevilla on Sunday, which saw their lead atop the table cut to three points, though Barcelona could close to within a solitary point if they beat Real Valladolid on Monday.

Atletico have won just four of nine games, having threatened to run away with the LaLiga trophy earlier in the season but pressure is mounting on Simeone's side as defending champions Real Madrid and Barca close in.

"We have to keep working hard and taking a look at what we have to improve," Simeone told reporters. "We have to slightly question our intensity and we need to make sure we get back the intensity that won us so many games and prove the squad's talent and ability.

"We have a week ahead of us now that some players, because of bookings, will not be able to play. We'll try and prepare as well as we can, and we'll keep going game by game. That won't change my mentality at all.

"We can't accept what happened today but we also have to accept that we have to improve, and there are very negative stats at the moment."

Atletico have lost two out of their past seven games in LaLiga (W3 D2), as many as their previous 40 games in all competitions (W26 D12).

Simeone, though, shouldered the blame for Atletico's defeat away to Julen Lopetegui's Sevilla.

Not the result we wanted in Seville. pic.twitter.com/uypOCSWwbm

"If I make the change at 30 minutes in, that's because myself as the manager, I made the mistake in the analysis of the game, and we wanted to try and do something else, and we tried to make as many changes as we could to make sure we push forward," said Simeone.

"I think the team improved in the second half, we were much more competitive, and we improved a bit more closely as to what we can do. We knew it was a very level game, especially in the second half. We had the chance from Mario Hermoso as well as Angel Correa's chance which was very clear as well.

"We are a side that needs to win games like this and we knew that probably, it was my mistake because I made the wrong decisions before the game so that the team felt comfortable. In the second half we just weren't close enough to what we normally play."

Atletico captain Koke was critical of the referee for not reviewing Acuna's goal amid claims Lucas Ocampos handled the ball at the start of the goalscoring move.

"It was a clear handball for the goal and there was another handball [by Diego Carlos] which should have been a second yellow card," he said.

"We have VAR which has to be there to help out. Today wasn't our day. On other days it has favoured us, today it didn't go our way.

"This is a tough defeat but we tried everything. We struggled in the first half but in the second we had chances."

Atletico director Tomas Renones added: The handball is clear [by Ocampos] and referee should have seen it. It has hurt us, but Atletico are not going to complain, just keep working to stay top of La Liga."