The in-form Gerard Moreno scored his 24th goal of the season as Villarreal secured a 1-0 Europa League quarter-final first-leg victory at Dinamo Zagreb. 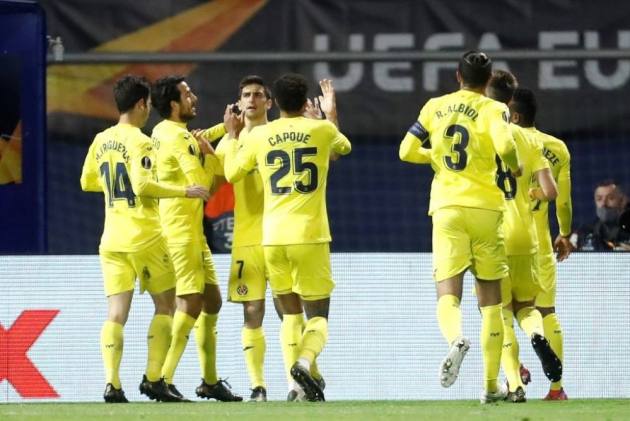 Influential Spain forward Moreno stroked in his eighth goal in his last five matches for club and country from the penalty spot in the first half at Stadion Maksimir on Thursday.

Unai Emery's side deservedly extended their winning run to six matches, with Mislav Orsic's disallowed goal for offside in the first half summing up the Croatian champions' night.

The Yellow Submarine were good value for their win and will be expected to finish off the job in the second leg at Estadio de la Ceramica next Thursday.

5 - @Eng_Villarreal @GerardMoreno9 has scored five goals in the #UEL knockout stage this season, more than any other player. Decisive. pic.twitter.com/KE5Opktfn7

Geronimo Rulli dived to his left to keep out Lovro Majer's deflected strike and Kevin Theophile-Catherine headed wide at the far post from a corner in a promising start for Dinamo.

Orsic, whose hat-trick knocked Tottenham out in the previous round, had the ball in the back of the Villarreal net, but the goal was ruled out as Iyayi Atiemwen had strayed marginally offside.

It was the LaLiga side who took the lead just before half-time, when the classy Moreno nonchalantly sent Dominik Livakovic the wrong way after Theophile-Catherine was penalised for what appeared to be an unintentional handball.

Emery replaced Carlos Bacca with Paco Alcacer at half-time and the Spanish side toyed with Dinamo after the break, dominating possession as they played with a swagger.

Samuel Chukwueze was unable to finish a slick Villarreal move with a second goal from close range and Dinamo boss Damir Krznar introduced Bruno Petkovic in a bid to turn the tide just after the hour mark.

Alcacer spurned a great chance to give Villarreal breathing space when he dragged a shot tamely wide before Livakovic tipped Manu Trigueros's deflected drive over the crossbar.

Dinamo struggled to get the ball off well-drilled Villarreal, who comfortably saw out the victory in impressive fashion.

What does it mean? Emery's men look bound for last four

Dinamo are potentialy still very much in the tie, but Villarreal looked like a side with plenty more in the tank as they extended their winning streak.

So composed on the ball, with Moreno a constant menace, Emery's side controlled much of the game in a professional away performance. Dinamo will have to show more quality in the final third if they are to defy the odds and move into the last four.

It seems Moreno can do no wrong at the moment, as he followed up his hat-trick against Granada last weekend with another goal.

He has now scored five goals to go with two assists in the Europa League this season and was the best player on the pitch, demonstrating his great vision and proving to be difficult to pick up as he drifted into space intelligently.

Theophile-Catherine might count himself unfortunate to have seen Daniel Siebert point to the spot when the ball struck his arm.

The Dinamo defender had earlier had another look of dismay on his face when he was unable to hit the target with a close-range header after a corner from the left floated into his path.

Villarreal are at home to Osasuna in LaLiga on Sunday, while Prva HNL leaders Dinamo face a derby at Lokomotiva Zagreb on the same day.