With figures of 4/54 in 8.1 overs against England, Prasidh Krishna became the first Indian bowler to take four or more wickets on ODI debut 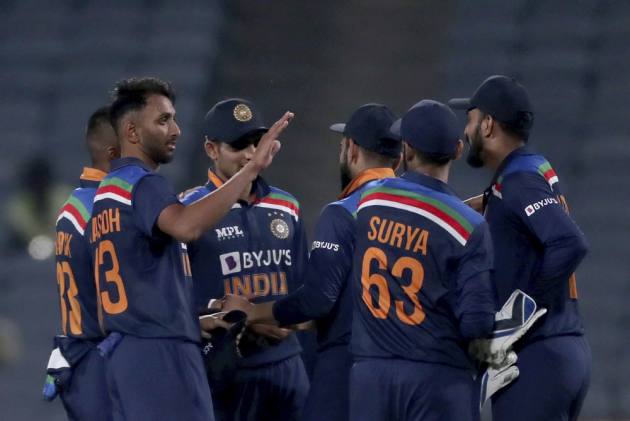 "Prasidh, I'm one of the happiest for you for what has happened today. When we picked you in 2018, I had no doubt that the way you bowled, it was a matter of time before you represent the country. The time has come. Go, shine boy. I'm sure you will do a fabulous job. Good luck with everything and I'm sure your international career will be really good," Karthik said.

ðÂÂ¥ Our #Knights have a message for @prasidh43, who will be making his mark in international cricket in the second half ðÂÂÂðÂÂ¼#KKR #HaiTaiyaar #Debut #INDvENG pic.twitter.com/NbDHX5dhqJ

With figures of 4/54 in 8.1 overs, the 25-year-old Kolkata Knight Riders player became the first Indian bowler to take four or more wickets on ODI debut.

But it was a nervy start for Karnataka player as Jason Roy (46) and Jonny Bairstow (94) took him to the cleaners early on, resulting in him conceding 37 runs in his first three overs. He got his revenge by dismissing Roy to break the intimidating partnership.

"It didn't start off well, and they came hard at us because we bowled poorly, but we had belief. We picked wickets in a cluster and that helped us a lot," Krishna said after the match. "I understood after my third over, I can't bowl full, and then I hit good length areas, and let the ball do the rest."

Krishna enjoyed a good Vijay Hazare Trophy campaign for Karnataka earlier this year, claiming 14 wickets in seven matches at an average of 24.5.

He is grateful for the IPL experience. "IPL has helped me, but it's important in a 10-over format it's more important to come back. I'd like to be known as a hit-the-deck bowler, and I'm trying to get the length more consistently," he added.

"...I'm going to go back to the drawing board and improve upon it. I hope I can be the partnership breaker for long, because the team needed it at the time, so I was happy to do it," said the six-footer, described as a potential X-factor by skipper Virat Kohli much before he made his debut.