While the Indian team went on a 20-day break after the final, Karthik moved on to his next assignment - the limited overs series between Sri Lanka and England. 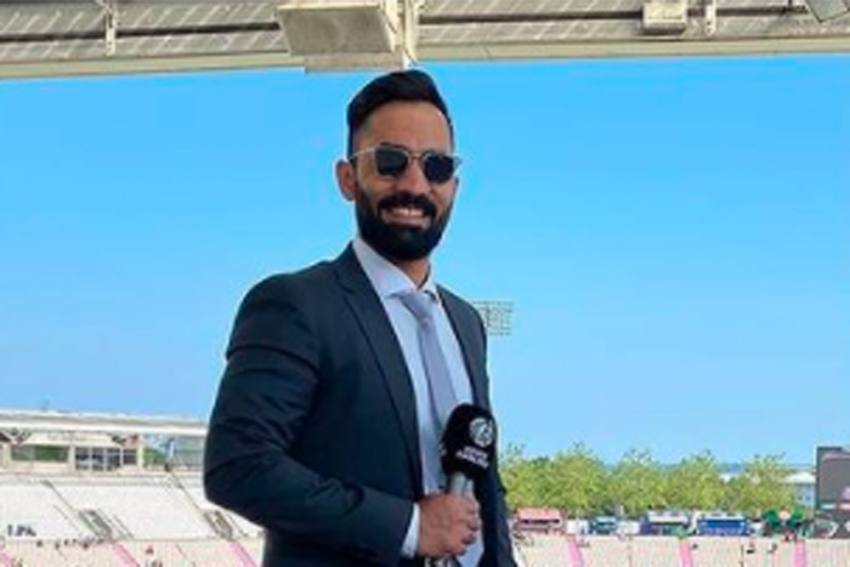 Commentary in India is considered a post-retirement option but Dinesh Karthik, who is very much an active cricketer, wants to change that perception. (More Cricket News)

With his sharp yet simple analysis, Karthik became an instant hit in the commentary box when he made his debut in the World Test Championship final between India and New Zealand last month.

Karthik says talking on the microphone is much easier than playing the game but it comes with its own set of challenges.

Discussing the game alongside the likes of Michael Atherton and Nasser Hussain was also an enriching experience for the 36-year-old. The cricketer in Karthik was not afraid to sledge Hussain a bit and yet earned plaudits from the former England captain.

The social media too heaped praise on the India wicketkeeper-batsman who brought a breath of fresh air into a commentary box full of doyens.

"Actually, I was the only debutant of that final," Karthik said with a chuckle.

While the Indian team went on a 20-day break after the final, Karthik moved on to his next assignment -- the limited overs series between Sri Lanka and England.

He will also be commentating during the five-match Test series between India and England before heading to the UAE to play for Kolkata Knight Riders in the IPL.

After the IPL had to be suspended in May due to the COVID-19 pandemic, commentary just happened for Karthik, who had done some punditry for Sky Sports during India's home series against England in February-March.

"I did that and it went pretty well. That is when I got the opportunity to do commentary and I decided to go for it. The mind set was just to speak about whatever little I know about the game," he said rather modestly having played more than 150 games for India across formats.

On the stereotype that commentary is a thing for the former players, Karthik said: "There are a lot of other sports like basketball and football where current players come on air when they are not playing.

"Even now during the Sri Lanka-England T20s, James Anderson was doing it for BBC in the next room. So it is a normal thing, it is only in India I think it is considered like that (post-retirement option).

"I obviously want to break that stererotype to an extent and I am happy to do this when I am not playing."

Before making his commentary debut, Karthik got to spend a lot of time with Sunil Gavaskar in Serbia, a country they were in for 10 days before entering the UK amid the pandemic.

"I am extremely lucky that it happened. He gave me a few tips (on commentating) and it went well. More than the tips, the time I spent with him was very enlightening and enriching.

"It was also a lovely country and Sunny bhai and I got to meet the Serbian cricket team which was very interesting."

Karthik is coming across as a natural on the microphone and all he did was take a couple of online sessions (on when to speak on air, when not to) before flying to the UK via Serbia.

Commentating on the players one has played with can be awkward but Karthik had a way of dealing with that.

"Commentary can be a lot of fun. You need to watch the sport very keenly to contribute in the right manner.

"Even while talking about the players (teammates), you just speak about the sport and you tell people how hard it is from their shoes. That is what I was trying to do.

"I enjoyed my process of understanding how each player would think at a certain point of time and speak on what is the right thing to do for them at the point of time.

"It has also been awesome to be sitting alongside Nasser and Athers (Atherton). They are the best in the business and just to get to chat about the game with them is something I have enjoyed immensely besides learning a huge amount," said Karthik.

He has not played for India since the World Cup semifinal loss to New Zealand in 2019 but the Tamil Nadu veteran has not given up on another comeback.

"A lot would depend on how the IPL goes, so looking forward to do well for KKR and let's see if that helps me (make the Indian team)."

Has it become harder than ever for him to make a comeback?

"Well, playing for India is always hard. You only realise (when you are outside) how tough the sport is.

"The stats say I have done well over a period of time. If I do well in the second half of IPL, who knows?"