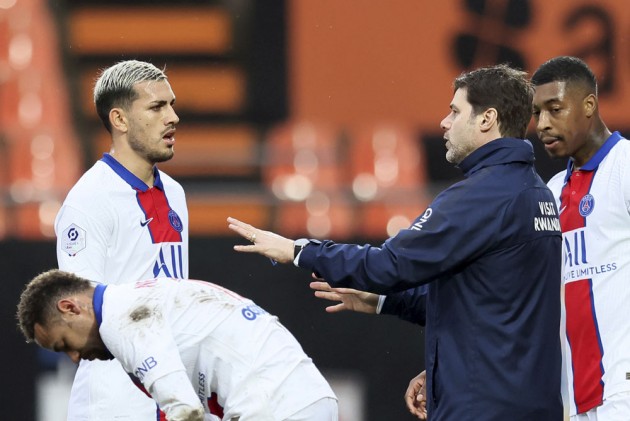 Mauricio Pochettino gave a damning assessment of Paris Saint-Germain's 3-2 Ligue 1 defeat at Lorient, declaring the performance to be "an accident". (More Cricket News)

PSG had the chance to return to the top of the table on Sunday and were on course to do so after a Neymar penalty in either half overturned Laurent Abergel's opener.

But Yoane Wissa netted a superb solo strike in the 80th minute before fellow substitute Terem Moffi streamed into the PSG half unchallenged to seal the points after an injury-time breakaway.

"We never got into the rhythm of the match, except when we managed to score the goal for 2-1," Pochettino told reporters.

"We are really sad with the result. We were too slow in the game, we gave Lorient too many options. We wanted to do something else but we did not succeed."

The defeat was PSG's first since Pochettino was appointed as Thomas Tuchel's successor at the Parc des Princes and the former Tottenham boss conceded there is plenty of work ahead as he tries to shape the team to his specifications.

"It is a problem of collective coordination," he said. "At 2-2, we wanted to go for the victory, which caused disorganisation and ended in our defeat.

"We are constantly looking to improve, to work. It's an accident, like can happen in football. We hope to be better in the next game."

PSG's central midfield two of Leandro Paredes and Danilo Pereira struggled to stamp their authority on the contest despite completing 92.2 and 95.5 per cent of their respective passes.

"Of course Marco is an important element, but you have to know how to play without certain players," he added. "It shouldn't be an excuse."

Lille subsequently beat Dijon 1-0 to move three points clear of PSG at the top, with Pochettino's side down in third behind Lyon.