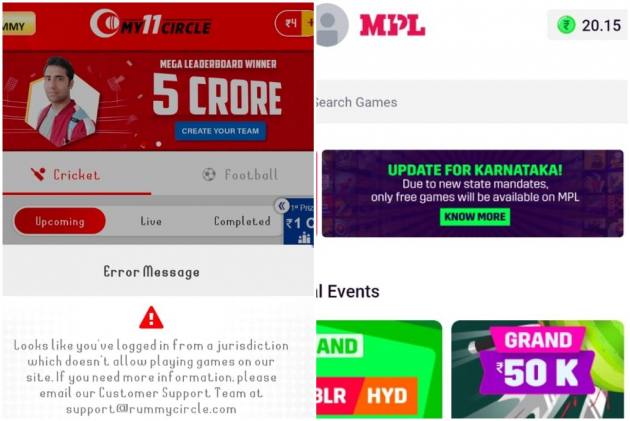 India's online gaming big boys are in a tizzy after Karnataka banned real money gaming on October 5. Close to 100 Bangalore-based operators, some of whom are endorsed by India's top celebrities like Virat Kohli, are worried that they may have to shut shop in India. (More Cricket News)

Close to 4,000 jobs in India's Silicon Valley are at stake when the country is slowly limping back to normalcy even as the third wave of the COVID pandemic lurks.

But one operator, Dream11, has contemptuously defied the ban. Till the time of writing this piece, Dream11, India's leading fantasy sports operator which is endorsed by former skipper MS Dhoni, was operating its app in full swing. Another popular app, MyTeam11 was also operational in Karnataka.

Not in Karnataka alone but the Dream11 app was accessible to some users in Telangana, Assam, Odisha and Arunachal Pradesh as well. These are the other states that have banned online games where people put in money to play.

The Karnataka law, which came into effect late on Tuesday, bans online games involving betting and wagering, and "any act or risking money, or otherwise on the unknown result of an event including on a game of skill".

The legal interpretation of the Karnataka Police (Amendment) Act 2021 seems to be core conundrum. The implementation of the law is an even bigger issue as it has been observed that governments can be 'selective' and can turn a blind eye to specific companies who choose to flout the rules.

Jay Sayta, technology and gaming lawyer says: "The new law passed by the Karnataka legislature applies to all skill-based games played for wager or stake. The law in its present form does not exempt any game or format.

"If any company or person is aggrieved by the current law, the available remedy is to challenge it in courts and get an order. Continuing to offer services in Karnataka after the law is in force can attract criminal liability."

Unlike Dream11, all other top operators have taken active measures to geo-block and prevent customers from states where online gaming has been prohibited. Prominent among them are MPL, Paytm and My11Circle. All three are endorsed by current or former Indian cricket captains -- Kohli, Sachin Tendulkar and Sourav Ganguly.

Interestingly, all three operators -- Dream11, MPL, Paytm -- are involved with the Board of Control for Cricket in India (BCCI) and partners the richest cricket board in the cash-rich Indian Premier League, the 2021 edition of which is underway in the UAE.

Dream11, which sponsored IPL 2020 after Vivo withdrew for a year, is clearly not keen on losing business when IPL 2021 is in full swing in the UAE. The company refused to comment when asked why it was flouting Karnataka's ban on online games that involved stakes.

"We are not commenting on the matter," said a company spokesperson. Several operators are alarmed that Karnataka has allowed Dream11 to function under the radar.

"Who is advising Dream11 by the way to stay open in Karnataka? Is it possible they have some deal from the government which allows them to operate and not comply with law?" said a top official with a major operator on condition of anonymity.

The deep fracture among the top operators is crystal clear. The online gaming operators have not been able to put a united front.

The Federation of Indian Fantasy Sports, founded and controlled by Dream11, has offered little comfort to its members like MPL or My11Circle.

Interestingly, in a note (assessed by Outlook) sent to its members, the FIFS said: "Given the penal consequences prescribed for violation of the Police Act, members must exercise abundant caution in the State of Karnataka.

"Members are strongly encouraged to consult with their legal counsel while deciding on whether to continue to offer pay-to-play variants of fantasy sports in the State of Karnataka in light of the amendments. We will continue to track the associated legal developments."