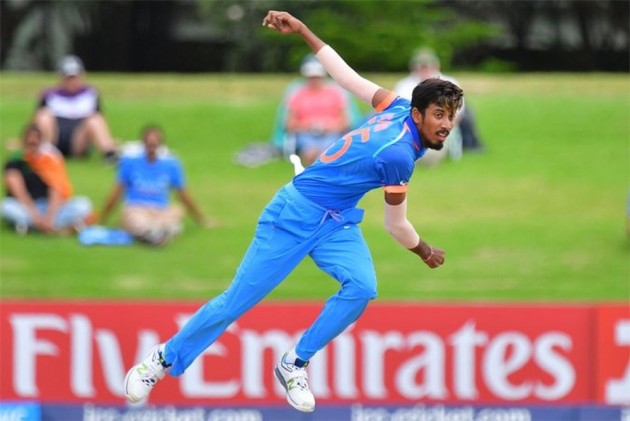 Lanky Bengal speedster Ishan Porel got three wickets including the prized scalp of his former India U-19 teammate Shubman Gill as India 'Green' reduced the 'Blue' team to 112 for 6 in a rain-affected opening day of the Duleep Trophy in Bengaluru on Saturday (August 17).

A total of 49 overs were bowled at the Just Cricket Academy ground where 'Green' captain Faiz Fazal elected to field when play started mid-way into the second session. (CRICKET NEWS)

Rajasthan's left-arm seamer Tanveer ul Haq trapped opener Snell Patel (5) leg before to set the ball rolling before Porel, who bowled good areas had Gill nicking one to Akshay Wadkar behind the stumps.

ALSO READ: Shastri Reveals What He Wants To Achieve In Next 26 Months

Porel, who is rated highly by NCA director Rahul Dravid, consistently got his deliveries to move away from the right-handers and also generated fair amount of bounce during the 12 overs that he bowled. His final figures read 12-7-26-3.

The in-form Ruturaj Gaikwad (30, 63 balls) showed positive intent hitting three boundaries and two sixes but Haq got one to shape in to breach the opener's defence.

Another away going delivery accounted for veteran Jalaj Saxena (19, 29 balls) while Ankit Rajpoot removed the burly Ricky Bhui (2, 26 balls) in between.